Contributed by aubin, Posted by Jesse Raub 13 years ago

Toronto, ON's Quest For Fire have announced that their debut, self-titled album will be released through Tee Pee Records on June 9th. The band features Andrew Moszynski (guitar), and Chad Ross (guitar, vocals) from The Deadly Snakes, who released Porcella -or- A Bird in the Hand Is Worthless [12 inch, double LP] in 2006.

You can visit the band's MySpace page to hear two songs from the album. 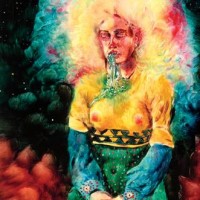 1. Bison Eyes
2. Strange Waves
3. Hawk That Hunts The Walking
4. I've Been Trying To Leave
5. You Are Always Loved
6. Next To The Fire