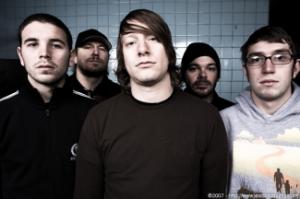 by Justin August 13 years ago

Comeback Kid are back from tour and wanted to check in one last time before signing off. So here it is, enjoy! They released Broadcasting… in 2007 and Through The Noise last October. Their other episodes are here: Episode 1, Episode 2 Episode 3, Episode 4, Episode 5.

Ok, Matt from Comeback Kid here, and this is the last update I have for you. Right now I'm in my apartment trying to clip my dog's nails, and thought this would be a good chance to reflect on the last two weeks.

The last Through the Noise 2009 show was in Haarlem, and I'd be lying if I said everyone wasn't dragging tail by the time doors opened. Groezrock just drained everyone. I think that was as good of an ending as you could ask for. The show was still a lot of fun. I sat behind Brandon's drums during Misery Signals and tried to hide my admiration for that band. As far as just consistently sounding perfect, I think they take the cake. As people and as a band I feel like we have a lot in common with them, and that became even more evident on this tour. During our set a kid slipped during a particularly nasty stage dive and hurt his head. I hope you're OK wherever you are. There was kind of a weird vibe the whole night just because the tour was coming to an end. Bane pulling out "Both Guns Blazing" summed it up for me. One of those things you just had to see.

Anyways, Casey getting yelled at for pissing in a bottle and dropping it in the garbage was probably the only comic relief. A lady at the venue "caught" him doing it and said "I EXPECT YOU TO CLEAN THAT UP." Well..it's in a closed container, in the garbage so…job done? He still apologized and all Dutch beef was squashed. We stayed up way too late, got some restless rest, drove 15 minutes to the airport and said our goodbyes. If you were still asleep when we hazily bailed out, sorry we didn't get a chance to say goodbye.

Misery Signals hopped on a plane bound for Seattle, where they had to start a tour *that day*. For those keeping track at home, that's another tour starting half the world away. Troopers. Bane took off for some shows in Ireland, and Outbreak immediately started a tour in the U.K. That's just the way it goes…you spend every day with a group of people you learn to love and depend on and then just like that, everyone has to go their separate ways. It sucks that the best tours end as quickly as they begin.

Us and Architects took off for Helsinki where we had a show that night. We were all exhausted but the show was still big and a lot of fun. It was nice to have a chance to bond with those guys for a day. They're a great band and hilarious people, check em out. If you live in Canada, you can see them on tour this spring. That night we stayed up way too late again on no sleep from the night before and made the most of it. I heard Andrew did some creative sleepwalking at the hostel but I can't confirm the details. We got up at 6 a.m. and headed for the airport.

My trip home was just as random as my trip to Europe in the first place. On two out of my three flights I sat next to babies (not mine). On the last flight I sat next to some cougars on vacation. Their thirst for Miller Lite was matched only by their lusty disposition. This time it truly was the moms that had gone wild. SPRING BREAK!

OK, I'm done here. To Nanouk, Tanner, Clean, Mike, Tom, Outbreak, Architects, Bane, Misery Signals and anyone else I might have forgotten, thanks for everything. And of course, a very, VERY special thanks to all of our European friends that keep coming out time and time again and making these shows so special. We love you.

Videos: Against Me! to release "The Original Cowboy" on Fat this summer