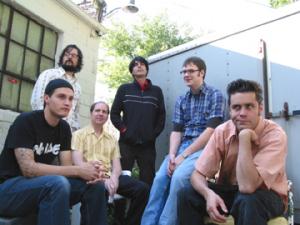 Some bands haphazardly release a DVD with every new album. For others, like Grand Rapids, Michigan's ska-punk veterans Mustard Plug, the process can sometimes take a bit longer. After 17 years on the road and still going, the band released its first in Never Get Out of the Van: The Story of Mustard Plug last December.

In addition to the usual fare of live footage and music videos, the band has culled 17 years worth of footage and cuts of a retrospective interview with the band's founders, Dave Kirchgessner and Colin Clive to create a true documentary.

Kirchgessner exchanged emails with Pads & Panels Bill Jones about Never Get Out of the Van.

A lot of band DVDs have a tendency to be pretty shallow, throwaway, often just extras with an album. Never Get Out of the Van seems to be the antithesis of this - a story 15 years in the making. Why did the band wait so long to put this together? Why now? Were there any band DVDs or other films that inspired what you guys tried to do with this project?

I know what you're saying. Over the last few years I've been watching a lot of other band DVDs to get inspiration or ideas and a lot of them can be really disappointing. There's too many of them that are the band's videos or a live show, and just some slapped together interview footage. It doesn't really reveal anything new about the band, and as a fan, I kind of feel cheated by the $10-15 I paid. It's not really fair to your fans to rush something out just so you have something new to sell. On the other hand, there are a handful that were really inspirational. The Bouncing Souls one is really good. The Who documentary, The Kids Are Alright, and the satire it inspired, Spinal Tap, are both really great films for very different reasons. My favorite of all time is If I Should Fall from Grace, which is a documentary on Shane MacGowan and The Pogues. I watched that countless times and was personally very inspired by it. It really gives you a good idea of what Shane is really like and does a really good job telling the story of his musical career.

As for our DVD, we didn't intentionally wait to put it together; we've actually been working on it for about 15 years. It all basically started with our first tour in 1993 when we bought a decent video camera to document things. We really didn't know exactly what the footage would be used for but we knew we wanted to eventually put something together to document the band on video. Right around our 10-year anniversary in 2001 we convinced our friend Benjamin Isbell to start filming stuff himself as well as start organizing footage that we already had. I think the task at hand was a bit harder than he initially thought. We had bags and boxes of video tapes on various formats and he had to sort through all of it and digitize it and put it on his hard drive. He'd have to sit around and watch an hour of drunken tour antics to get maybe a minute or two of usable footage. Meanwhile, he was interviewing us and working his day job. Before you know, a year or two goes by and we have more footage for him and more things to talk about. We went through 4-5 rough drafts before we were finally satisfied with the final product. Don't get me wrong, there was a lot of procrastinating involved on both our parts, but in the end we felt there was no rush to get it out, and the most important thing is to release something that we enjoyed.

What was it like for you and Colin to sit down and record the retrospective bits for the film?

It was really fun. It kind of forced me to re-examine the last 17 years I've spent doing this and put it all in perspective. There's so many day-to-day frustrations with being in a band, and it would be too easy to say, âI've been wasting my time on working a job that doesn't pay the rent.â It's good to really re-examine that time and remember how fun and rewarding it really is/was.

How has the dynamic of the band/the music scene/ska changed or stayed the same since the band started 17 years ago?

When we started out there were far fewer preconceptions of what ska, especially what third-wave ska should be. Back in 1991 we really felt like we were part of a scene that was creating something new. There was more freedom to create whatever you wanted because third-wave ska hadn't really been defined yet. Seventeen years later I don't see as much creativity in most of the new bands. So many of them have just decided that they are going to create music that fits in one narrow sub-genre of ska or another. Don't get me wrong; there's still lots of talented people out there and great bands coming up.

For those who haven't seen the film, where did its title come from? Never Get of the Van is an expression we use in the band, sort of an inside joke sort of thing. It's a reference to the movie Apocalypse Now where the Chef guy gets out of the boat to look for mangoes and almost gets attacked by a tiger. "Never get out of the boat," is a quote from the movie. We usually use it when someone in the band decides to take off with friends after the show instead of going back to the hotel. There are quite often regrets in the morning. That said, the title also references the Minutemen and their "jam econo" philosophy. It's just sort of about staying true to punk rock DIY ethics and lifestyle.

What is your favorite scene in the film?

There is a scene from our first tour, where we had a show fall through in Utah and some friends hook us up with a living room to play in. We're playing "Mr. Smiley" and there are about five people in the crowd, but they are going NUTS. Just skanking like crazy fools with big smiles on their faces. It's just so funny, but in a cute, warm-hearted sort of way.

There's an interesting but out-of-context bit in the deleted scenes where you put a hammer through a wall that has a graffiti swastika. What was the deal with the venue and the situation that lead to the attack on the wall?

Yeah, that's kind of a funny scene. We actually wrote a song about that on our latest album called, "You Can't Go Back". There is this punk rock club in Muskegon, Michigan called The Icepick that has been around for probably 25 years or so. Rick really wanted us to play there since he is from Muskegon. Colin and I used to go to lots of shows there back in the late 1980's, D.O.A and SNFU and lots of local stuff. Back then there were a lot of Nazi skinheads that would go there and racist bands that would play there and lots of Nazi/White Power graffiti on the walls and stuff. Rick assured me that it wasn't like that anymore and I told him I'm up for playing there as long as there is no Nazi graffiti on the walls anymore. So, anyway, we're playing the show, having a good time, when I saw this skinhead lurking around and just kind of acting weird. At some point I see him take a bottle of spray paint and draw a swastika on the wall behind us. After our song, I ask the crowd if anyone has a bottle of spray paint âcause I wanted to spay paint a circle with a line through it over the swastika or cover it up or something. (The Icepick is just the sort of place where there is an excellent chance someone would indeed have a bottle of spray paint on them). Anyway, I couldn't come up with a bottle of spray paint, but I did find a hammer so I smashed the wall where the swastika was. Mark, the owner, who actually is a really nice guy, runs up and asks why I was smashing the wall, and I tell him. He makes sure I'm not going to smash up anything else and we finished our set. It's a little comical when you see the footage, but I was feelin' it at the time, if you know what I mean.

What is it like seeing yourself with the hair from the early days when you watch the film?

Hilarious. We were always about swimming against the tide or whatever and I basically kept my hair long, for so long, just to annoy people, especially those in the ska scene. Looking back though, I looked pretty ridiculous.

Is there anything you wish you would have done differently with the film?

I wish we had gotten more footage of other musicians that we have played with over the years. People and bands like Bucket from The Toasters, and Dan P from MU330, and Jeff Rosenstock from Bomb the Music Industry, the Parka Kings….etc. It would have been cool to have some more of our fellow travelers tell their side of the Mustard Plug story. Maybe in another 15 years we'll have to do an updated version and include them!

It is mentioned in the movie that the band usually takes awhile to get new albums out. Any plans for follow up to In Black and White?

Unfortunately, we're slower than ever. We plan on focusing a lot more on song writing this summer, but no definite plans right now.

What do you think you would be doing today if not Mustard Plug?

That's kind of tough. I think I'd be running an indie record label. I started a small label back about the time I stated the band called Dashiki Clout Records. Mustard Plug just sort of took off and I spent a lot of time on the road and the label idea sort of fell to the wayside. I'm still planning on reviving it now that the band is touring less.

What does the future hold for Mustard Plug? Do you see yourself doing this 17 more years down the road?

It's really hard to say. We don't have any plans to quit; in fact, we just bought a new van that is going to take us a few years just to pay off. It's pretty hard to imagine me doing this when I'm 57. (I just turned 40). But right now I'd say until people stop coming to our shows or we're not physically able to do it, we'll keep on keepin' on.