The Riot Before (Episode 2) 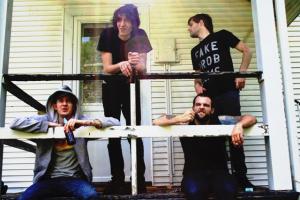 Tonight's Dispatch comes courtesy of Richmond, Virginia's The Riot Before who have just returned from their first tour of Europe. In today's episode, vocalist/guitarist Brett Adams talks about being across the pond for the first time.

The above is a pretty good summary of my stream of consciousness for at least the first five or six hours after our arrival. Everything I saw seemed to remind me where I was, and that revelation always led to a sort of stunned disbelief, a feeling that this couldnât be real, that someone must have made a mistake and weâd soon be getting escorted back home, while a "real band" made their way over from the States. But it never happened, and soon my disbelief eventually just turned into all out excitement, an excitement similarly felt by Cory, Jon, and Freddy, and which soon manifested itself in all of us as a hypersensitivity to differences between the country of our departure and that of our arrival. Any sort of divergence from standard American culture was pointed out audibly in the form of an absurdly broad, though unanimously positive, generalization about all things German. After driving maybe ten miles in a very specific part of Hamburg we had already established that: German carsâ¦, German people dressedâ¦, German driversâ¦, German womenâ¦, German traffic lawsâ¦, German bikesâ¦, German citiesâ¦, German laws about drinkingâ¦, Germanâs preferred brand of beerâ¦, German architectureâ¦, and so on for what seemed like forever. I found this whole comparative generalizing immediately annoying but, unfortunately, the part of me that gets annoyed by things like this has absolutely no interaction with the part of me that thinks about and then says things. As a result, I ambitiously took part in the discussion and hated every single second of it. Iâm sure that Patrick, who had been incredibly generous in picking us up from the airport and offering to show us around the city, both quickly regretted said generosity and his proficient understanding of these stupid Americanâs (i.e., The Riot Beforeâs) language (i.e., not good English).

I think the force behind the need to identify difference was driven by our attempts to come to terms with just how far away from home we were. Itâs as though thereâs a part of our brains that simply refuses to accept that things can be similar in distant locations. When we had just arrived and our astonishment that we were actually, physically in Europe was strongest, our brains followed that astonishment with the assumption that things would be vastly different, and began a subconscious quest to catalog dissimilarity. This led both to the above generalizations, and, even worse, to a sort of surprised amazement at any hint of shared custom or the sight of an imported American good. When we drove by a Burger King for the first time, someone, I think it was Cory, almost gleefully shouted, "Oh my god, a Burger King!" even though if you would have asked him before we left if there were Burger Kings in Germany, he would have looked at you like you were an idiot and said, of course. I almost did the same when I saw a Ford car on the street, but, thanks to my near socially paralytic need to blend in with my surroundings, I was able to bite my tongue. Instead I made small talk with Patrick about the German economy using information which I had just that morning gleaned from a recent copy of The Economist, purchased pre-flight in order to assimilate with commuting businessmen (of course). It looks like, because the German economy relies heavily on exporting goods, they have been hit pretty hard by the larger global economic crisis and a decreasing need for imports from other countries and the current unemployment is above ten percent but predictions are that the economy will most likely rebound faster than the U.K.âs and the U.S.âs and that reciting all of this information in no way makes German people think youâre any less annoying than if you had just shouted, "Oh my god, a Burger King!" Lesson learned.

Luckily, if one was to graph the correlation between "acting like an idiot" and "time spent in a new country," the former would decrease in a reassuring slope as the latter extended. We saw a especially sharp decline in this type of naivete later that day when we met up with Death is Not Glamorous, whom weâd be joining up with for the duration of the tour. A year and a half ago we played about three weeks worth of shows with DING in the states and, as what often happens when bands go on a tour together, we became really good friends. But, as is also the case with people you meet on tour, especially when they live across an ocean, we havenât seen them since. So a big part of our excitement about this tour was that it would be with DING, and we would have the opportunity to pick up where those friendships last left off. What was also beneficial about being with them was that they have toured Europe pretty extensively in the past and their experience served as a sort of keel, preventing us from being blown over by every insignificant and minor thing European. Their confidence and nonchalance was immediately contagious and it kept us all from expending our enthusiasm on things not deserving it. This was incredibly helpful because the days to come would present us with more than a few moments worthy of the entirety of our ardor.

At that nightâs show in Wunstorf, we played arranged in the corner of a small room, the remainder of which was filled to capacity. The crowd was refreshingly optimistic, as though they wanted to like our songs even before the first note rung out. They stood as if on a slight forward lean, on the balls of their feet, ready to meet us halfway. It was welcoming and reassuring and just, well, fun. By the end of our second song I begin to realize that this tour was going to live up to all the expectations we had of it, and maybe even surpass them. There were a handful of people in the crowd who even knew the words to a few songs, and that alone floored me. Here I was in a city I had never even heard of just an hour before, playing a song I wrote on a strangerâs couch an ocean away, and someone was singing along in what wasnât even their primary language! It was one of those moments where I just sort of observed it from the outside as a spectator, incredibly surreal, astonishing. I wished it would have lasted forever but, sadly, because I had slept a highly interrupted 2 hours in the past 40, a few songs later I began to realize that my body was exhausted beyond a point no amount of caffeine could compensate. What a canary is in a coal mine, the voice is in the depths of exhaustion, and by the fourth song mine was dying, fast. I have a ton of experience with strained vocal chords, I used to lose my voice almost nightly, still occasionally do, but the way it left my throat that night was different than any other time. It wasnât from overuse, but under-sleep. It seemed to just clock out and take the back door. By the last song of our rather brief set, I was feigning notes more than singing them, sweating heavily from struggling just to make a sound. But none of this appeared to dampen the enthusiasm of the crowd, and for that I was very grateful.

After we played I escaped upstairs for a moment to change clothes, and then I watched DINGâs set from behind a glass wall while drinking a tepid, yet tasty beer. The issue of beer temperature was one I had been warned of before the tour started, and I was determined from the outset to find warm German beer not only delicious, but preferable. I planned on returning to America with a horribly annoying, imported beer temp pretension. I would go to great lengths to leave my beer out, telling people who didnât even ask, and probably preferred not to know, that I liked to drink my beer warm because thatâs what they do in Germanyâin most of Europe actuallyâand when I spent a significant amount of time there last spring I just got used to it. I would imagine that these people would find me very cultured and maybe so impressive as to keep a sort of reverent distance for the rest of the night (my life?). Luckily it took about three days and ten beers to begin to rethink this whole thing, and my chance of retaining any sort of friendships in the future are starting to slowly re-appear like that picture in Back to the Future.

The night ended for me not long after. I tried in a vain at socializing, and my excitement to be overseas at a show hanging out with good friends kept me going for a little while, but soon I gave into the weight of exhaustion and went back upstairs to sleep (a lot of venues in Europe, on top of feeding bands and giving them plenty of beer, also have places in-house for them to sleep and shower. Amazing.). I found a mattress whose cleanliness suggested the repose of a long history of unkempt musicians before me, and passed out almost instantly, with uninterpreted German rapidly spoken just outside in the graffitied hallway.