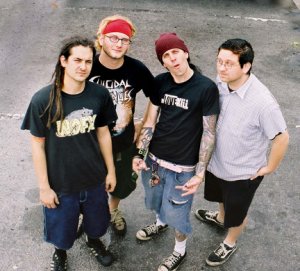 Contributed by ben_conoley, Posted by Ben Conoley No Idea Interviews 13 years ago

While he's best known for his work as co-vocalist and bassist for Less Than Jake, Roger Manganelli has also put time into another band - Rehasher. The band hasn't released anything since 2004's Off Key Melodies, but in this interview with Zack Ziegler he explains that fans of Rehasher can expect more in the near future.

Knowing how much the Harvest of Hope Fest will help people in need must feel different than if you were playing an ordinary show or festival, right?

Roger Manganelli: It feels better, special. Itâs one of those privileges you get from playing music for a long time. I would never expect those opportunities to fall out of the sky, but when it does, it feels good.

That show is kind of a kickoff for an entire US tour [with Les Than Jake] so itâs cool to start it off with a lot of bands and somewhere that has that family feel. You know, bands that know each other. Itâs kind of like The Fest in Gainesville; itâs the same vibe, where people are hanging out and theyâre happy to be there. So Iâm excited about it.

I know you spend a lot of time touring with Less Than Jake, but can you hook us up with a Rehasher update?

As far as getting Rehasher on the road, after the Warped Tour this year Iâm thinking weâre leaning towards Less Than Jake taking a little bit of a break. Itâs been a hectic 16 or 17 years, so I want some time off so I can get on the road with Rehasher because all we have done besides play around Florida is one two-week tour.

So youâve been pushing for a break for Less Than Jake to focus on Rehasher?

Well itâs not so much pushing, but after the last couple years weâre going to take a break and find time to work on another record. In that time, if there is enough time, I could see trying to make something happen like a U.S. tour with Rehasher. Iâm not bummed on it or anything, but it would be cool if there was time.

OK, just wanted to clear it up in case you were trying to announce some breaking news on Punknews.org or somethingâ¦

No announcing. [Less Than Jake] is already booked until the end of August when the Warped Tour gets over, so by then, weâll have toured on the last Less Than Jake record for more than a year and a half, so itâs time to chill and think about another record.

Do you notice a difference in your approach to music, or maybe a different energy when youâre with Rehasher?

Itâs totally different for me because I get to play guitar. Iâve been playing bass for a really long time, but Iâve played guitar my whole life, so itâs different getting to play guitar. Itâs a different vibe and we havenât been on the road that long so we donât know what to expect.

The only other difference is that I write the lyrics for [Rehasher]. Itâs fun as shit. Both bands are fun as shit. But it is cool to play guitar because I play guitar on a lot of the Less Than Jake recordings, but playing guitar live is fucking fun. Itâs another part of my brain getting to work a little. I write a lot of songs and I am kind of involved with trying to [create] bands with friends of mine that are other styles than the stuff I do all the time. Rehasher is a little bit of a branch off of the song writing concept or structure of a Less Than Jake song, but itâs kind of like using a different part of my brain a littleâ¦ itâs tough to explain. Sometimes there are songs during their inception that sound like a Rehasher song - itâs fast or whatever - then sometimes those ideas can develop into a Less Than Jake song. Or vice versa. As I said, itâs weird.

When is Rehasher going to release a sequel to Off Key Melodies?

I finished the second Rehasher record and â¦ itâs being mixed by Stephen Egerton. If you donât know who that is, weâre not friendsâ¦

Iâm about as bright as Al Bundy, but I know who Stephen Egerton is. [Laughs] Yeah, well heâs mixing it right now, and Iâm getting e-mails from him with rough mixes of Rehasher songs that I recorded last year that I started writing two or three years ago.

When should people start looking for it in stores or to steal from the Internets?

Honestly, I donât really have a good guess. Iâm trying to figure out a label to put it out because I want it to have a little more steam on it. I want it, maybe, to have more people hear it compared to last time. I loved the last record; it was out on No Idea and they did a great job, it was exactly what I wanted at the time. But I feel like it could be â¦ somebody else could put it out. So Iâm kind of fishing around.

Actually, JR from Less Than Jake has a management company. He manages bands and he has a band on Epitaph and a couple bands on Hopeless, so thereâs a few calls in to see if anyone out there wants to put it out.

We just did the recording with the guys at the house and getting Stephen to mix it, itâs all in house so thereâs not really any outside influence. It might be cool to get someone else to come in and be like, "Letâs get you guys on these shows" or something. You know?

Sometimes you get pigeonholed as "That guy in the band," but I love talking about Rehasher and letting people know that I do other shit, too. It all comes back down to that initial feeling of being on stage with dudes youâre friends with. It doesnât matter if itâs Rehasher and Less Than Jake, thereâs a vibe that exists. We get together and have a good time and thatâs what continues to make me feel like the luckiest guy on the planet.

It sounds like youâre always working on something regardless if itâs with LTJ or Rehasher or another band youâre trying to help out. True?

Yeah but it doesnât feel like work. I just get to hang around music. Outside of music, I donât do much. I fly remote control airplanes.

As you get more exposed to different avenues inside the music industry, have you noticed a change in where youâd like to see your career go?

For me, Iâm the guy in the band with the studio. Iâve always been the guy in the band with a studio since day one. Iâve had some time off and Iâve been off tour, so I recorded an EP with a band from Gainesville in my studio. So I do want to have time and opportunity to produce bands. Ultimately, itâs a cool thing because youâre not personally attached to songs because you didnât write it. But I can lend my knowledge and experience on song writing and recording to other bands. It just seems like the older I get the more I love being in the studio.

Given that youâre a veteran of the scene, is it common for bands to come up to you searching for advice?

A little bit. I get e-mails and a lot of general knowledge questions about how to get a bass to sound better or how to book a tour and stuff like that. Iâm still on tour a lot, though, so I donât have a lot of time to work on other bands. So thatâs something I do a little bit but I feel like I would do it moreâ¦ but I donât think that many people know that Iâm into making records and that I know how to use Pro Tools and stuff like that.

Well maybe theyâll read this interview and start blowing up your phone and youâll have zero time to do anything.

[Laughs] Yeah, maybe. I just love being around music and creative peopleâ¦ itâs kind of crazy, this band I just recorded has the most phenomenal drummer on the planet; heâs a fucking crazy-good drummer, but he sings pretty good, you know? I [still] think the EP will come out great. But then Iâll work with another band theyâll have an awesome guitar player, but the bass player sucks. And as a producer, you have to know how to work with that, work with what youâre given and come up with the best formula for that band. Itâs a cool challenge and a puzzle. I love doing it.

I spoke with Chris Cresswell from the Flatliners and he was pumped to hit the road with you guys. You into his band at all?

Theyâre fucking great, but itâs one of those things that if we didnât tour with them Iâm not sure if Iâd know who they were. Iâm so far removed from what people are listening to. All the music I know weâve either toured with them or Geis calls me up and says, "Dude, you gotta hear this band." So itâs cool to get to know these guys and their music.