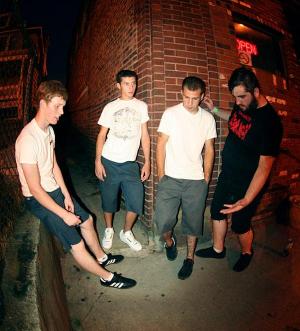 Cleveland, Ohio's The Sidekicks have been busy prepping Weight of Air, the followup to their 2007 Red Scare effort, So Long, Soggy Dog. To get people stoked, they agreed to pen us a series of Dispatches, the first of which start this evening.

This was day 1 of recording our second full length, Weight Of Air.

We all arrived from our separate parts of Ohio at Magic Child Studio, in Akron. Our dear friend Andy Cook was in attendance for production/moral support/prayer and Eric Cronstein was on board for engineering. It immediately became apparent to me that the atmosphere of the whole recording process would be easygoing and fun.

In the midst of us setting up microphones, getting drum tones, and deciding what snare to use, Sanders (drummer) walked in the room, shirtless, rubbing his bod, asking, "Ready to cut some drums?" We burst out laughing, provoking Sanders to remove eventually all of his clothing. Yikes. 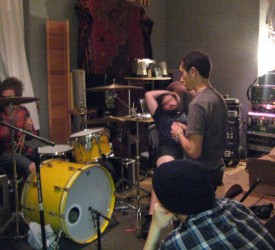 The drum tones sounded really cool, a la Pinkerton; enough like Pinkerton to make Andy say "That sounds too much like Pinkerton, we need to change that." We got the guitar amps set up and played together for a little while. I noticed the songs on this album are a lot more focused on developing dynamics within each song, as opposed to the full-speed ahead approach we previously employed. There was a good nervous energy amongst us. I also think the room was a comfortable fit in that it didn't feel too much like a studio, which can sometimes be a drag to spend long hours in. We weren't to start tracking until the next day, so once we got the tones where we wanted them we called it a night, eh, morning (5 AM).

Day Two of recording Weight Of Air: The second day of recording our new full length began around 3pm. After some computer difficulties, we got warmed up and started tracking. The setup of the studio is just one long room with high ceilings in a warehouse type building. We each were positioned around the drums, facing each other, which seemed like the most natural and comfortable formation to play in. We did everything "live", tracking drums, rhythm guitars, and bass simultaneously, as we wanted the recording to sound tight, but not robotic.

After getting done with one song, we had to stop because the studio wasn't allowed to make noise from 8 until around 10 that night. Apparently the studio is right above a space where a guy, we'll call him Thadius, routinely performs plays on a makeshift stage to five to ten weirded out onlookers. Ian, our friend who runs Magic Child Studio, said Thadius is pretty space-cadetty. Apparently his wife left him and all of his plays relate to that somehow. When talking to Thadius about what time we could start tracking again, Ian asked, "Is 9:30 cool?" Thadius replied, "No, 9:40!" We left and went on the roof to listen to some Green Day to kill time.

We started tracking drums promptly at 9:39, and got in what Ken Shamrock would refer to as "the Zone". Having Andy Cook there to produce definitely made the experience more organic and less stressful. He did a good job of allowing us to not think about anything else but playing the songs and "sitting in the pocket." 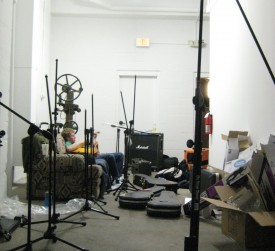 The night flew by, in the way that it does when one is so intently focused on a specific task. It felt like my body had shut down sending energy to any other body parts except those functioning in thinking and playing music. I found myself nearly taking naps mid-song. Eric and Andy were running on numerous performance enhancing drugs to keep them awake, including turbo coffee from Burger King, which has the consistency of motor oil.

With intermittent breaks, we finished basic tracking around 8 a.m., I took a 45 minute nap, then recorded guitar leads. Lack of sleep notwithstanding, Andy and I jumped up and down like schoolboys in listening back to the feedback I cut on a song. Meanwhile, Ian and Eric's girlfriend lay like casualties on the couch and chair in the hallway. Matt nailed his guitar leads and we eventually wrapped the session up around 1 p.m. We were too tired to properly listen back to all the songs, but I think everyone felt pretty ecstatic about all we had accomplished in that single day.