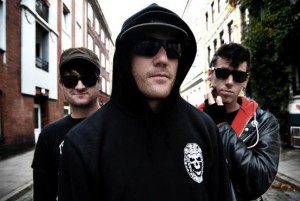 Cobra Skulls have provided us with an exclusive first look at the art and title for their upcoming full length. The record is titled American Rubicon and is due out July 14, 2009. It is the follow-up to Draw Muhammad which was released in 2009.

The band has also posted the first song from the album. Go check out "H.D.U.I. (Honorary Discharge Under The Influence)" on their myspace page.