This Is Hell details 'Warbirds' 7-inch

More details about the upcoming 7" from This Is Hell has been announced. The record is titled Warbirds and is due out August 18, 2009, and will follow up 2008's Misfortunes. Think Fast! Records expects to post a pre-order soon, but in the meantime has posted the cover art and track listing, which includes three originals and two covers from the band. 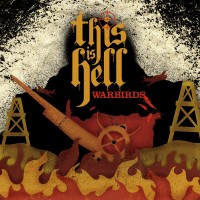 Streams: Something Fierce: "There Are No Answers "