Love it or hate it, for the past 15 years, summer has meant a return of the Vans Warped Tour. As the tour continues to grow in size and scope it has brought in new fans and alienated others. Punknews decided to get the scoop on what to expect on this year's Warped Tour by heading to Pomona, California to check out the first date of Warped Tour 2009. 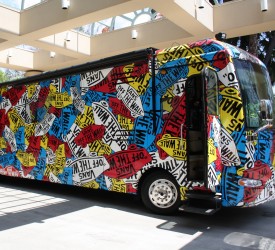 2:36AM: - Sitting on a plane from Toronto to LA. I got up at 12:15AM (or 4:15 in my time zone) to catch a flight from Fredericton to Toronto. Been wondering how I could interview 15 bands at Warped Tour, about Warped Tour and make it interesting for them, myself, and readers. Been listening to The Lawrence Arms' Oh Calcutta. I forgot about the song about Warped Tour. The Arms were kicked off the Tour a few years ago. Some say it was because they kept talking shit about the Tour. Who knows. Either way, I can't help but laugh about it. I haven't been to a Warped Tour since 1998. After 11 years I like to think that the reason I haven't been going back is because the nearest stop is usually a seven hour drive from where I live. Then again, I tried to go in 2002, but my Mom wouldn't let me borrow the car when I was home visiting. Actually, it was a mini van. But part of me knows I haven't gone back because I haven't wanted to. I've made longer drives to see bands before, so it wasn't entirely the trek that was holding be back. At the same time, I'm looking forward to this trip. 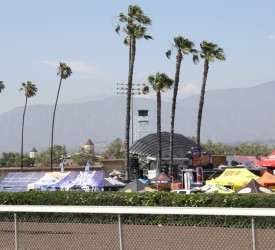 12:13: I just realized that I had been up for nearly 12 hours and having had only eaten a single bagel, I was very hungry. One sandwich, yogurt parfait, cookie and coffee later, my stomach hurts and I wish that I was listening to Andrew WK. Warped Tour rehearsal in a few hours. Party?

1:00: I meet up with other Canadian media who have come down to check things out. Standing outside the pickup gate at LAX we see a very brightly coloured RV barreling down the road and stopping in front of us. It turns out that Vans has decided to pick us up in style. We meet the driver, Mario, who normally uses the vehicle to take Vans' atheletes from one event to another. The RV is covered with the Vans logo and I feel as though this is the closest I'll ever come to becoming a pro skater, and I'm aware of how distant I still am. Is Vans trying to twist my objective view with the rockstar treatment? As I struggle through an ice cold beer, I assure you that I hope they are, and continue to do so. 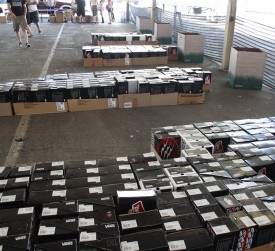 3:00: Met Steve Van Doren, who's father started Vans, the shoe company so successfully attached to the Warped Tour. Today Steve was heading a crew that was likely charged with one of the more "thank you" generating tasks of the day - giving every band and crew member free shoes, clothing and other assorted goods. Not surprisingly, Steve is stoked about the start of another year on the road. "It's an amazing, beautiful day. We've done tours of Australia, New Zealand and Japan, so it's a special thing [to be back for the 15th year of Warped Tour], says Van Doren.

3:30: While trying to arrange some interviews a small man wanders towards me and introduces himself as Matthew Leone. He plays bass for Madina Lake. I'm vaguely familiar with his band and hadn't planned on interviewing them, but what's one to say? It turns out that Leone is a genuinely nice guy and loves talking about touring. The band, who recently released Attics to Eden on Roadrunner Records has been on Warped Tour before. He says the secret to surviving the entire summer is pacing one's self and eating according to when you might be able to next use a bathroom. 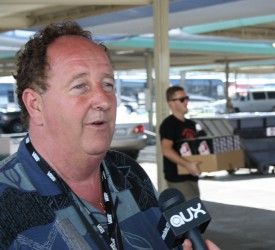 3:45: I see the guys from Outernational sitting around a picnic table. They're easy to make out because they are wearing matching red jeans and black tee-shirts. Sounds silly, right? The band is being touted as the next Rage Against the Machine, but judging by the songs on their recent release, Future Rock, they're closer to Global A Go-Go Joe Strummer. Vocalist Miles Solay says one of the things they're most excited about is hitting the smaller markets that Warped Tour either goes through or draws from. "We are from New York City and Warped Tour hits a lot of smaller markets with suburban and rural youth. Even in the major markets get people from the outlaying areas." The band says that reaching out to these people is important to their goal of not keeping the revolutionary spirit of their music confine to basements.

5:30: Standing in the fish taco lineup. Fish tacos are one of the things I always wanted to do in California. Time to check it off the list. Then again, I wonder if they're any good coming out of a cafeteria lineup. 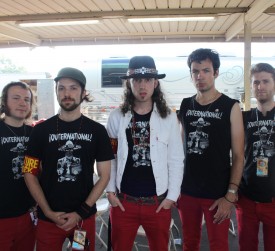 6:08: It's amazing to see how important it is for bands to be out on this tour. I've heard more than a few stories of bands having emailed or called Kevin Lyman every week for a year asking to get on dates of the tour. As big a machine as it has become, it is easy to forget that.

Check back tomorrow for the first date of Warped Tour

Every Time I Die drummer quits