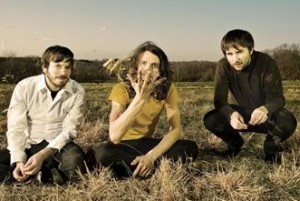 Good Old War haven't been a band for too long, but the four-piece has been stirring up quite a bit of buzz since the release of their debut album, Only Way to Be Alone. Punknews interviewer Zack Shapiro saw the band perform recently at The Stone Pony in Asbury Park, NJ where he had a chance to have a short chat with the band.

Coming off of The Only Way To Be Alone what are the plans for the next album?

Dan Swartz [Guitar, vocals]: The next album is going to be two EPs that are gonna come out. We havenât picked a release date yet but itâs all done, itâs all recorded. Itâs just a matter of finishing them up and getting ready to release them and figuring out what our plan is from there. Weâre really excited about the new stuff that weâve recorded right now.

Dan: Theyâre going to come out separately throughout the year, hopefully early Summer and then early Winter and then hopefully next year weâll have another full length out.

And itâs still going to be on Sargent House Records?

Zack: Where do you draw the inspiration from for your music?

Dan: Our inspiration is definitely the places we are or whatever weâre thinking that day. I think itâs more of our lives than musical, as far as where the songs actually come from. Itâs not like "Oh, I heard a song like that, I want to write a song like that." Thereâs not a logical thought process to putting the feeling of a song down.

How did you decide to go with a three part harmony and the folk sound coming off of being in Days Away?

Tim: Originally it was supposed to be one guitar and vocals and it was supposed to just be real stripped down acoustic and thatâs where it started. But then we would do these cover shows and play bars and play all these cover songs and we all would just start singing together and we realized that it sounded good and we had a good blend going so weâre like, "Weâve gotta do this in the songs."

Dan: When Keith [Goodwin] and I first demoed stuff when Days Away had just gotten off tour, it wasnât really for a project necessarily, we started demoing some songs that we were writing separately and giving to each other and when we started putting the harmonies down we needed one more voice anyway so we started laying down three every time and it seemed to work out well that way. So Tim was able to do all the parts. We all have a very similar range. Every one of us has one place where they can go where the other person canât go.

So Keith is the highest?

Dan: Actually Keith is the middle, the lead singer right in the center. Iâm the highest and Tim, Tim has a pretty broad range but he generally sits on the lower parts.

Do you have titles at all for the new albums?

No, weâve been tossing them around. We had one but it didnât get agreed on. And thatâs definitely part of the process of getting it up and ready to go. I couldnât tell you how excited I am about the stuff that weâve done.

Is there going to be a vinyl release?

Dan: Yeah, definitely. Only Way To Be Alone is going to come out on vinyl and hopefully thatâs gonna somehow coincide with our EP release. Itâll be a full length vinyl. Thatâs part of what weâre trying to figure out. I canât really say exactly. The vinyl for Only Way To Be Alone will absolutely be coming out.

Whatâs your favorite place to play?

What are you listening to right now?

Dan: We are listening to a very wide variety of things.

Tim: I just got this new Squarepusher [album] that I really like. Itâs badass. Itâs like space-disco. Alien disco.

Dan: What am I listening to? Iâm listening to The Hollies, Blood Sweat and Tears, The B-52âs, the new Animal Collective record. Lots of underground old stuff, it seems like. Iâm starting to discover a lot of those old bands that Iâve missed, like 10 years after, bands that were really cool but just got missed along the way and discovering that theyâre just amazing bands.

I can speak for Keith and say that he listens to a lot of Harry Nilsson and a lot of reggae. Those things are on in the van all the time.

Ever thought about doing a reggae song?

Dan: Yeah. We want to one day make a record thatâs us singing, like songs that we wrote, but have a real reggae group play all of the music. We love reggae and we love the feel of it.

Two Members of Panic At The Disco depart