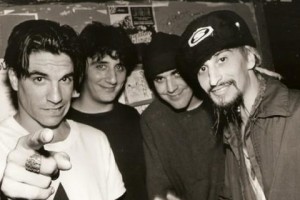 by Aubin Paul Side One Dummy 12 years ago

It was recently announced that Los Angeles-based Wax would be reuniting for Riot Fest 2009 in Chicago. Some further details on the reunion, and some of the band's plans have been unveiled. The quartet includes Joe Sib of Side One Dummy Records and 22 Jacks, Dave Georgeff (bass), Tom "Soda" Gardocki (guitar), and Loomis Fall of Jackass fame (drums).

WAX released their debut album, What Else Can We Do in 1992 on Caroline Records. The album was recorded in two weeks by Ramones/White Zombie producer Daniel Rey. In 1995, WAX followed up with 13 Unlucky Numbers in 1995 which featured the famous "guy on fire" video by Spike Jonze for the song "California" which MTV banned from daytime airplay.

The band recently got together and decided to release a vinyl 7-inch featuring four unreleased WAX songs that were originally intended for 13 Unlucky Numbers. All proceeds from this 7-inch will be donated to UCP Wheels For Humanity, and will be released on Side One Dummy in August 2009.

One point of real pain in Weezer's collective psyche in 1992 was our jealousy of Wax. Not only had these friends and former equals (at the bottom of the social ladder) actually made it (in the sense of getting a record deal) but we actually LOVED their music, we worshipped their music. It was so catchy, so ridiculously hook-laden. Every part of every Wax song was as fun and heart-stirring as the last, and each part lasted only as long as it was fresh and then was replaced by the next.