Black Numbers has announced that they will be releasing the next 7" from Higher Giant. Al's Moustache is due out on August 11, 2009 and will follow up The First Five, released earlier this year by Runner Up Records. Two new songs from the release are available for streaming -- "See You Later, Chopstick" can be heard at the Black Numbers website while "Union Square" is available for streaming at the band's myspace page.

The record can be pre-ordered here, and facial hair enthusiasts 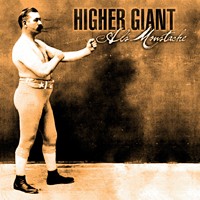 Tours: Fake Problems cancel remaining headlining shows due to death in the family