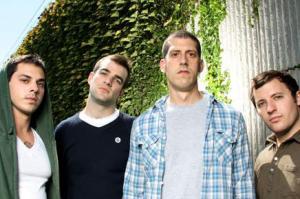 Philadelphia-based hardcore unit Paint It Black have been creating music since the early 2000s, when they released their debut album CVA. Two LPs later, the band (fronted by vocalist Dan Yemin of Kid Dynamite and Lifetime fame) are now busy flexing their EP muscles. They released Amnesia on June 16 via Bridge 9 Records and will follow it up with a second EP, Surrender on August 18 via Fat Wreck Chords. Both EPs come in the form of 7" vinyl, focusing on the roots of the band's passion. The band will hit the road with Naked Raygun this September to support the efforts. Punknews.org interviewer Laila Hanson was able to sit down for a phone interview with Yemin on July 20.

I noticed that you went with two different labels for Surrender and Amnesia. What was the reason behind this decision?

We made the decision to just put out 7-inches at this point, to kind of give us the opportunity to just try working with different people and seeing how it feels. There are relationships that I have with people at every label, so on the next level, I'm making a working partnership. I've known a lot of people at [Fat Wreck Chords] for a long time, [and] I've known a lot of people at Bridge 9 for a long time. They both [have] decent people that believe in and are really supportive of the band, so I thought it would be cool to have a shift [of people we work with].

You're coming up on this short tour with Naked Raygun this fall, are you excited for that?

Oh yeah. They're[some] of my childhood heroes. They're really one of my favorite bands from the mid-80s, it's really exciting for all of us. It's kind of an expansion of a relationship we started a couple years ago, where we had Jeff [Pezzati], their singer, sing on one of our songs on [our] last album. Then Jeff has another band called The Bomb, and they were working on their record in Baltimore a few months ago, and they asked me to come down and sing on one of their songs. So, I don't know about the rest of the guys, [but for me], it's a serious case of hero worship. I think they're an amazing band and they're also one of the most under-appreciated bands of the '80s. I just feel really lucky to be [going on this tour] with them, I'm really flattered that they asked us.

I noticed that most of your songs tend to be short and to-the-point, lyrically speaking.

Well, we're a hardcore band, and that's [pretty much] what hardcore is [Laughs]. We are always trying to figure out a way to challenge the conventions of the techniques that we play. Punk and hardcore have pretty narrow rules about how you do things. But that being said, I think the general sort of trend to make songs short and to-the-point is one of the rules of punk and hardcore that I think [is] worth adhering to most of the time. Although we have gone over that line [before], I don't want to make things longer than they need to be.

How was the writing process different for the two EPs?

Really, the EPs were written as part of one batch of songs, that was the intention. We didn't decide which songs were going on which EP until they were recorded and mixed.

What got you to divide [the songs] up the way you did?

I don't think I can actually answer that, because there would be about 10 million little answers [Laughs]. We applied the same kind of scrutiny to this group of songs that we did to our [other] albums. So when we recorded albums, we spent a few weeks sequencing them. We sort of [take] a long look at the songs, break them down by structure then there's that sort of intuitive piece, like what songs feel right [next to] each other. But then there's also [the fact] that we don't want to put two songs back to back that have the same structure, or same kind of arrangement. So usually when we sequence a record, we have a little index card for each song, and we write the attributes of the song on each index card, and we lay them out on the floor and we experiment with different kinds of arrangements and sequences, and we argue with each other about it. After going through that for a few days, we sort of come to an agreement. We try to obsess over it kind of like the way we obsess over everything about the writing process. We obsess over details. We definitely didn't want to take the easy route. We put out two EPs this summer, one on a label that's more hardcore, and one on a label that's more pop-punk. We didn't want to put all the melodic songs on the Fat Wreck EP, and the more heavy, aggressive songs on the Bridge 9 EP. It would have been what people would expect; it would have been a creative cop-out. We wanted to put out two EPs that were a lot more well-rounded and a lot better executed.

What draws you to vinyl releases?

We've always had vinyl for our records. As record collectors, it's always been really important to us. I think it sounds better. Certainly in terms of just having a music collection; for me it's important to have something to actually handle, that there's a tactile experience to it, to buying and owning a record that isn't so much [a] digital format. And that's how it's played out, we've always been really stubborn about that, that 10 years from now [physical albums] will be a totally dead format; I think CDs will just be landfill. But having an album just as a download kind of freaks me out. I think a lot of people [just] buy the digital format; they don't get the artwork or the lyrics, that really freaks me out. To me, that's totally missing the point. For a band like Paint It Black, for people to not have the lyrics makes no sense at all. It always freaks me out when people will email us and be like, 'Could you give me the lyrics to this song? It's my favorite song.' And it's like, 'It's your favorite song, and you don't have the lyrics? How is that possible?' But it's just a whole different generation, so I can't really judge it. I can just try to put out music in a way that's comfortable for me.

Do you miss being innocent in the music industry, in comparison to when you started out with Kid Dynamite and Lifetime?

Well, when I started touring and making records in Lifetime, punks weren't even part of the music industry, really. The music industry and the punk world didn't really intersect much. Now, they're very much part of each other. I do miss the innocence, I do miss the…there's a lot of things I miss [Laughs]. But I think some of it is just nostalgia. It's hard to say whether I think things are better or worse now; I think anybody is going to have fonder memories of the way things were when they were young. Everything is a little more pure. Some of that's true, and some of that's perspective. So I'm really cautious about saying whether things were better or things were worse. I can't judge that objectively. There were certain aspects about being involved in punk in the early 90s that were really different. It's hard to say exactly what I miss about that. Every time I think that all the things that excited me back then are gone, I'm proven wrong. I'll meet some young kids who just saw their first band, and I'll see how attached they are and how excited they are and how great they are, and the fire in them, and then I'm ashamed for ever having thought that things were better.

Do you have a preference when it comes to touring and recording?

No. They're all just different aspects of being in a band. Touring and recording and writing are all amazing and blissful and frustrating and maddening in their own way. Touring gets a little more complicated if you're in a long term, monogamous relationship and you're trying to figure out how to make that work when you're gone for long periods of time. And in Paint It Black, the longest we're away is like, 17, 18 days, because I can't get away from work for longer than that. That's one of the things I've been thinking about a lot, trying to balance being in a band with the aspects of adult life that demand a lot of time and energy, like marriage and a career. I'm grateful everyday that I don't see music as a career [Laughs]. When I see the sacrifices that my friends who are doing [music] full time have to make, that doesn't particularly [cut] it for me.