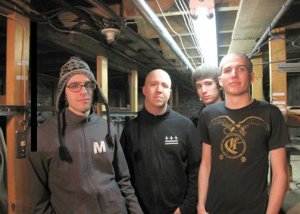 by Bryne Yancey Contests 12 years ago

Today, we've got a cool contest for all of you vinyl nerds out there. Farewell Party Records is giving the wax treatment to Hospice, the sophomore full-length from Rochester, NY's Achilles which was originally released on CD via Hex Records in 2007. Hospice was lauded by our very own Brian Shultz, who remarked in his review that "Hospice is assuredly a step up from the also excellent The Dark Horse, which combined some of the best aspects from heavy but ambitious acts like Botch and Breather Resist. Achilles seem to forge their own territory here, diversifying their sound and concentrating less on atmospherics and more on a heavy base, mixed up tempos and interchanging riffs." The band features members of Soul Control and Polar Bear Club.

Two lucky winners will receive a test pressing of Hospice, used only for the record release show and limited to 60 copies. Good luck! Those of you who don't win may want to pre-order the record from Farewell Party or Vinyl Collective.

The Prizes 2 winners will receive:

Contests: Win a copy of Off With Their Heads: Live At the Atlantic 2