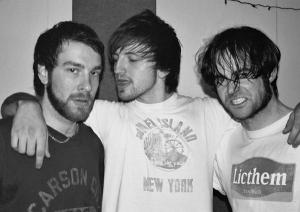 Cardiff, Wales' Future of the Left recently released their second record, Travels With Myself and Another. The band's vocalist Andy "Falco" Falkous recently talked to Matthew Bentel about the bands vision and goals.

How important was your sophomore release, Travels With Myself and Another? The band seemed to be shadowed by its predecessors, but has ostensibly outgrown those bands and settled its own course. Would you say this is true?

Well, I'll tell you in six months or so in terms of the wider perception but we moved on a few years ago. It's like having a really popular ex-girlfriend who keeps trying to kill you by leaving the gas on.

You're from the UK, so are not at the comfort of stateside media. Though NME has given a few nods to you, how do you think certain American media - especially, say, the influential indie webzine Pitchfork Media - have helped you? Do you think you'd be as successful in the states if it weren't for publications like them?

Doubtless it plays a part in terms of numbers in the crowd / inquiries to torrent sites but I'm yet to really convince about the effect of these media. Specifically in terms of the site you mention, many people at our shows are severely distrustful of Pitchfork in a similar way that a certain strata of British audience is suspicious of anyone they see get consistent coverage in the NME. Perhaps it's a game they play, post-hipster malaise tennis, but I've yet to find anyone with a good word to say about it.

This record seems to be getting pretty much blanket positive coverage but will that end up helping us out? Well, I'll be able to tell you in about six months time when I'm either writing another one or crying into my hands in some call center somewhere.

Your lyrics have been a major topic of conversation. They always get a bit crazy and maniacal but then always seem to come back to a point. Obviously intentional, but was this something inherent in your writing or a technique you picked up elsewhere and felt was more effective than writing more straightforward songs?

Although I'm obviously in thrall to my influences, as is anybody who opens their mouth to sing in the company of words, I don't have a particular form to my writing other than to limit its ridiculousness to merely silly. Straightforward songs hold little appeal for me so perhaps I'm reacting against that or maybe I'm just shit at holding onto a narrative thread convincingly.

Considering your lyrics still, coupled with the music, do you think youâre bringing a refreshing sense of rock and realism? The brash, attractive, if only because fanatical, though understanding, lyrics with the hard, low, trashing sound suggests your trying to speak on behalf of something larger than the typical band discourse; as if its miles away from simply making music and playing?

There's certainly no rhyme or reason in our existence other than being a rock band to the very best of our abilities. Although I would hope the music (whether recorded or at a live show) speaks to and of our personalities, I would feel awkward with the idea of representing anything other than ourselves through it.

Is there a certain concerted, directed message your trying to get across throughout the new record? On top of the band name, songs like "Arming Eritrea," "I Am Civil Service" and "The Hope That House Built" suggest some agenda, rather political and, while not completely denouncing any one ideology, considerable questioning the logic and the future of it.

There's no explicit message at all. It's important that we represent ourselves and only ourselves. As individuals we're political but I would struggle to convey the details of this in a three minute pop song.

How is going on tour with like a band like Against Me! Did that make sense for you, and do you think it added to your popularity? You guys seemingly share a lot of the same beliefs, destined to share the road together…

The tour didn't obviously make sense, not least to a bunch of their fans, but it was a particularly fun time which was ultimately incredibly rewarding. Interestingly enough their crowd was far more diverse and welcoming in the US than in Europe - I have no idea why this is. Reactions in Europe were almost universally diabolical.

Belief wise, well, the rock music fills the centre of both bands existence, and in that respite we are very similar indeed - all of our rock n roll is saved for the stage, and not for the lifestyle that accompanies it.

Tours: My Epic / So Long Forgotten