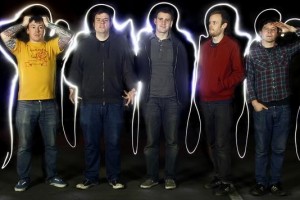 Contributed by ben_conoley, Posted by Ben Conoley Paper and Plastick Interviews 11 years ago

With three full lengths, two Splits, an EP, a demo and countless tours under their belts Shook Ones have proven that they are not easily shaken from the radar. Bill Leary exchanged e-mails with vocalist, Scott Freeman, discussing a nasty case of pneumonia, a ballyhoo of records, and of course their newest release The Unquotable A.M.H. out on Paper + Plastick Records.

Paper + Plastick has had an exciting set of releases in 2009, with offerings from Foundation, We Are The Union, The A.K.A.âs, and of course yourselves. What was it like being part of a budding new label?

I gotta say its been really awesome working with a label that is solely concerned with putting out records that they like. Well, obviously I think they hope that other people like the records too, otherwise it becomes a bit of a money pit hobby. Our experience has been great. Its been very casual, and has given us a chance to be creative with how and what we do as a band because Vinnie (owner) is so supportive of any idea we may have. Not all of them are good ideas mind you.

Due to the current state of the music industry and the download culture of todayâs youth, artists and labels are being forced to evolve their business strategies. How has this effected the band?

Its effected us positively, I think. Bands can reach a lot of people these days without having to tour 9 months out of the year. Additionally, the download culture has really had no impact on the strength of vinyl as a collectible and desired medium, to a degree. This is where Paper + Plastick have really taken note and have tried to implement a model that makes the best use of their time and energy. I mean, Lumberjack/Mordum just went under. Thatâs crazy, and it signals the fact that things have changed and that no one is invincible. You just need to adapt I guess. It is definitely sad that people who worked hard and were passionate about music couldn't get by with those two things alone. The world is a savage place, and such is its evolution I suppose. As I write this I guess I get more and more scared. Haha. Lumberjack was pretty evolved with digital releases and what not, and they still got swallowed up. I mustn't fret. Bands will still be bands. We will still play shows. Next question. Quick!

The Unquotable A.M.H carries a sound that is more mature and melodic than earlier efforts. What inspired this direction?

There was definitely no intended shift towards maturity. I think it just happened and because of this, I hope it came off palatable and not forced sounding. A big part of it was the amount of time spent writing and recording. We had lots, and I do believe the record is better because of it. For example, some of these songs I had started demoing in mid-2007. Thatâs pretty wild, now that I think about it. So a lot of songs got to go through reworking processes, which can be a definite good thing, but not always. Another factor that cannot be denied is the musical tastes of everyone in the band has really always been pretty vast and I feel like this time when writing, a lot of those flavors and ideas made it on the record. Itâs really cool in my opinion. It made for a very dynamic record that I hope wasn't totally devoid of cohesion.

What would you say the overall theme of the album is?

Uhh, marination? Haha. Is that a word? I shall explain thusly: we didn't play every song at the fastest tempo we could think of. Thatâs a huge part of it. A lot of melodies that I have always written, tend to get obscured when the tempo is wildly fast and unchecked. Itâs not always bad, but I think this record turned out how I imagined every other record would have turned out in my head. Not exactly, but you get the idea. For the first time when I play the record, I hear every little thing my neurotic brain schemed up, and that has not always been the case. In summation I would bring it full circle by saying we let a lot of the melodies and ideas marinate a little more before moving on. Itâs like cooking, you donât want to rush that marinating process or you'll be kicking yourself in the end.

Formerly, you could always count on a Shook Ones track to sound somewhere between a Kid Dynamite and Lifetime song, but numbers like "Birds on Ice," "Silverfish," and "Tip The Weatherman" break that mold. Do you feel that fans will finally be able to quit drawling comparisons from those bands?

I think those comparisons are totally fair and quite honestly flattering. It is true though, you would be hard pressed to find either of those bands writing songs like the ones you mentioned. I donât think the comparisons have been a crutch per se, but I am glad that people see these songs as something more unique to Shook Ones. I think we have always done things with a slightly different approach but it got overlooked a lot of the time. I just want to make sure that the one thing we always do is to bring the energy that those two bands bring to recordings, even when we are doing stuff that is a little more "out there". I can say though, we never set out to consciously try and distance ourselves from those two bands. We love them both. But as I said before, things just kind of took their own shape in the course of writing and recording. It feels pretty natural to me.

What was the biggest challenge with producing the new album?

Some of the hard things were strictly a battle with our own lack of skill musically. Playing around in different tempos, writing parts that had more "room" around them, make it much easier to hear the fuck ups. They also require more of us live. I want to make these "different" songs sound just as energetic live, even if we are controlling the tempo a bit. It was the same struggle while recording them too. I am so glad we did though. So to embrace brevity, self-control was the biggest challenge.

For those who have not heard the new album, describe it in 5 words.

Ok, ok. I am lucky this is an e-mail interview or else I'd say something even more stupid than what I am about to type……….hmmm………

"Powered by melody and potatoes"
or "Good songs by ugly dudes."
or "Some songs sound like Descendents."
last one, "Energetic, thoughtful, fun, aggressive, and….."

A tour in support of The Unquotable A.M.H has yet to be announced, can you give us any details on an upcoming circuit?

I can assure you something is in the works. We are really excited about it, but canât spill the beans just yet.

Shook Ones are playing at Sound & Fury this August. What reactions do you think youâll incite from fans when playing amongst more straight forward hardcore acts like Ceremony, Trash Talk, and Reign Supreme?

I am always shocked by how well audiences treat us when it seems like the bands that we are playing with are so different from us. But you know, this is really why I got attracted to punk and hardcore in the first place. Its always been a place that generally loves and embraces variety. We have played with almost all of these bands, and definitely the ones you mentioned a lot of times and itâs not just at a big fest. Itâs really a great thing, and it makes it a lot easier to survive as a band who doesn't really bring much heavy stuff to offer. We do try to make up for it by looking silly and losing our voices. I really canât wait for this show.

With the constant touring, practice, and recording, how do you maintain your vocals? Do you have a regimen to soothe your throat after a run of shows?

You know I donât really have a strict regimen. I probably should. I remember I used to try and get all serious about my throat with tinctures and teas, but I feel like it usually made it worse. I found that just sticking to my normal routine was pretty alright. I gotta tell ya though, I have been thinking about reconsidering lately. We had a bit of a break after our European tour and at the end of that tour I got this nasty lung thing that was actually pneumonia and it lasted for like 5 weeks. Constant coughing and weird stuff coming out. Not cool. It really did a number on me cause I have been feeling beat down vocally even still. I feel better but my lungs are still feeling weak. I must say too, I have pretty bad asthma to add to all of this so it doesn't help. I did pop a zinc lozenge today. I think I also need to go running too. Get back to pre-pneumonia levels. I donât know about you, but I really canât stand running. I need to be doing something like chasing a ball or something. Arghh. Got any suggestions?

Over the past 5 years Shook Ones have released, 3 full length, 2 Splits, an EP, and a demo. What future plans do you have? Will you be working towards another full length or do you plan on releasing a series of 7"s?

We still gotta do our Hour of the Wolf split, which got put on hold for a variety of reasons. Still committed to it though. Itâs safe to say we will be up for just about anything the wind brings our way. Thatâs pretty much how we have always rolled. I gave up trying to plan anything a long time ago.

Vinyl has always been a format that Shook Ones has embraced but the majority of your catalogue is now out of print. Are there plans to re-press any of your previous releases?

I would love to have all of them in print. I mean, itâs cool that they sold out, but I honestly have not seen vinyl at our merch table in a long time and itâs bumming me out. Truth. We'll get that new LP out there, but it always makes me feel good to see a real hefty selection on the table. Is there a term for many LP's in a collection? You know like a quiver of arrows or a murder of crows? Can we invent one to describe how I'd like to see our merch table? How about a ballyhoo of vinyl? …..uh, a crunchet of wax? Obviously I am going to need help with this one. Please insert your suggestions. Life is all about word smithing.

Videos: Recipes: Carnitas Burritos with Roasted Pablano and Tomatillo Salsa (The Riot Before)