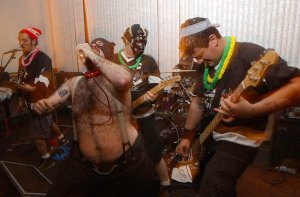 New York City hockey punks Two Man Advantage are set to head out for their first tour in over five years next month. In the first two weeks of September the band will relocate the Phoenix Coyotes perform shows across the US, hitting both coasts and wrapping up in Long Beach, CA by mid month.

The band is touring in support of their recent release South of Canada, which was released last year on Rodent Popsicle.

Tours: The Spits (US)