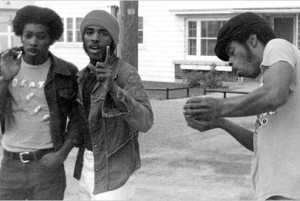 Contributed by aubin, Posted by Adam White 13 years ago

Earlier this month the organizers of Austin's Fun Fun Fun Fest announced that (now) celebrated Detroit protopunk act DEATH will make their first and only festival apperance at the event. DEATH joins bands like Lucero, the The Jesus Lizard, Melt Banana, 7Seconds, the King Khan & BBQ Show and Les Savy Fav at the two day festival. The fest continues to leak bands via a quasi-hidden area of their website. Fun Fun Fun Fest will take place on November 7th and 8th in Austin, Texas.

DEATH performed and recorded in the early 70s, predating many of early punk bands, but were mostly lost to history and record collectors until this year. Recent reissues and a profile by the New York Times recently put the band back in the spotlight.