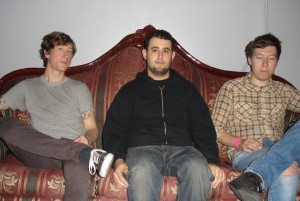 Houston's O Pioneers!!! are a hardworking band, producing new releases on a regular basis despite their frequent lineup shuffles. They have two new 7"s coming out and are about the embark on a west coast tour. Kira Wisniewski spoke with singer/guitarist Eric Solomon via phone about the hardships of having a revolving door of new band members, new music coming out and why you shouldn't go completely insane at the Fest in October.

On your MySpace page it says "we should probably just break up."

Yeah, kind of. Basically, Iâm not sure how familiar you are with the history of the band, but right now Iâm playing with two guys who joined the band maybe about six months ago. So this is the sixth or seventh new member of this band within a four/five year period. It seems like this band has this really, really bad luck of people both wanting to be involved with it and at the same time not wanting to be involved with it; whether it is because of not having the time or not wanting to devote energy to it. So itâs kind of a joke, but sometimes it seems like if a band goes through that many members maybe itâs time to just stop and try to start a new project. So itâs a little bit half and half.

Right now things are kind of weird, just because Anthony and Dino, the other two band members, just took new jobs. So theyâre unable to tour right now. Iâm in a weird situation where I might start having a touring band and a writing/home band. Thatâs kind of where itâs at right now so itâs an interesting fix of things.

But despite all of that you still release a ton of stuff; you have two new 7"s coming out. How do you keep producing so much music with all the lineup changes?

I donât know; I write a lot. And then whenever we get a chance to practice and Anthony can get time off work for like a weekend, weâll just sit in a room and try to come up with some new stuff. Actually I had this conversation with Anthony yesterday about trying to figure out how to write the next album with a revolving door of people in the band and how exactly that works. Itâs a challenge; we just keep trying to put out more records on different labels and different formats mostly to keep ourselves interested I think.

Can you tell us some more about the new 7"s?

Yeah, right now there is one coming out on Whoa Oh Records and itâs just going to be one song on a one sided 7". Itâs a brand new song that we just wrote about a month ago. Each one is going to be hand-screened and hand-die cut; a real limited release. I think there are only going to be 300 copies of them. They are primarily for this west coast tour that we are going to be doing. We asked our friend John, who runs Whoa Oh Records, if he would do it because he has an awesome, awesome label and heâs a really good friend of ours. So weâre pretty stoked that he said yes to it. The Under the influence record has been coming out, goshâ¦ for like over a year now. I think that we were one of the first bands that Virgil from Suburban Home had actually asked to be a part of the series. It just took us a really long time because of the six different people that have been in this band. So it just took a little bit to get it going.

Earlier this year you made a limited 250 lime green cassettes for the record Neon Creeps - how was that received? Do you still have some of those remaining? Were people really stoked on it?

Right now we have about 20 left because we just got them from the label like last week I think. Iâm not really sure how many they have left. From what I understand itâs going really well. With this record the goal was to put it out on as many different formats as possible and the opportunity came up to put it out on tape. We just kind of went with it. I think it came out really, really cool and Iâm really pleased with the artwork.

Do you think tapes are still a relevant form of medium or more nostalgic now in 2009?

Thatâs a really interesting question because I feel like it is still kind of relevant, but at the same time irrelevant because it is nostalgic. Itâs a weird thing too because I know a lot of my friends are in their early 20s and theyâre buying their first car or getting a used cars and theyâre older [cars] and they have cassette players; so people are really stoked about that. But at the same time there are iPods and other MP3 players that can be played through a cassette player. I think that people are stoked on the fact that itâs a really cheap medium to make music, but so are CDs. So I donât know; I really donât know how to answer that correctly.

No, no thatâs a perfectly fine answer. Talk about the upcoming tour.

We are doing about two and half/three weeks on the west coast with our friend The Anchor from Austin, TX. Weâre pretty much going from Houston, and then I believe in three or four days, weâre all the up to Montana and then head west and then do some stops in California and then a big circle back home. Iâm pretty excited because there a lot of cities Iâve never been to with this band, like Seattle and Portland and Olympia. There are also a lot of awesome bands involved with this tour so it should be really, really fun.

Being where you guys are in Houston, TX you do some massively long drives; what's the longest you've done?

We do a lot of super drives. Usually the first two days of tour consists of us driving anywhere from eight to 15 hours to get to a show. A lot of that is just because Texas is so big and the other states nearby donât necessarily have really strong scenes in places that are en route to where weâre going. In the past weâve done straight drives from Houston to Birmingham, Ala. and thatâs like 15 hours. Weâre going to the Fest in the fall and I believe weâre driving straight to Tampa and thatâs about 18 hours. And weâll probably drive back straight from Gainesville to Houston which is about 13-14 hours. I think itâs just kind of something that weâve all accepted. Whatâs 15 hours when you can have a great time with friends and family?

What do you do to pass the time on these long drives?

Usually Iâm driving a good part of the time. We tend to drive in eight hour shifts for some reason. Iâm not really sure why, it just tends to play out that way. So if Iâm not driving Iâm either sleeping in the van or reading comic books. Either one tends to kill the time pretty well. What are some of your favorite comics?

I really like the Tick and I really like Hellboy a lot. Iâve been reading a lot of Hellboy comics in the past three or four tours.

Looking forward to the Fest in October, the lineup has just been released; anyone you're particularly stoked to see?

Iâm really excited to see Samiam. We played a show with them last September. It was actually during the hurricane that hit Houston and kind of shut down Houston for a couple days. We were up in Austin playing that show with them. At the time I wasnât too familiar with the band and their material, but within the year since playing with them Iâve listen to Samiam a lot. So Iâm really, really excited about seeing them again and Iâm actually trying to set up a house show or an extra show for Samiam and us. Iâm keeping my fingers crossed for that. But other than that, it will be great to see our friends like Bridge and Tunnel and the Sidekicks. Iâm also pretty excited to see Defiance, Ohio and American Steel.

You are basically veterans now of the Fest, for first time Fest goers, what words of wisdom do you have for them?

Donât go crazy. You have to remember itâs a small town. So when people go insane and nuts and break things it makes it harder to do it the next year. Thankfully everyone that runs the Fest and has sponsored the Fest have worked really, really hard to keep maintaining those relationships with places like the Holiday Inn that keeps getting kind of destroyed. You know, play it safe. Have a good time. But make sure that we can do it again next year.

Outside of O Pioneers!!! you run I Heart You Productions, how did you get involved with that?

Basically my girlfriend and I started it out of boredom. It started with a single button press - by making buttons for bands about five years ago this summer. Since then weâve kind of kept progressing and progressing and progressing and now this is what we do for a full-time job - the two of us. Itâs pretty cool. Sometimes I kick myself because Iâm so lucky. Some of the awesome projects that we get to do and awesome things we get to be a part of; itâs just a cool thing. What kind of bands have your worked with?

Pretty much everything from huge to small. Like I would say our biggest clients are Ministry and KMFDM - old industrial bands from the 1980s that are still around and still touring. We also do all the merchandise for Matt and Kim and MC Chris. We do stuff for a little bit smaller bands too like Fake Problems and a bunch bands that play the Fest every year. Thatâs actually another really cool thing about having a company like this because we can be part of and be sponsors of things like the Fest in October. Also, in September weâre helping sponsor another festival called North Park Awesome Fest; which Iâm pretty excited about too.

Are you playing that as well?

Weâre actually playing that on Saturday [Sept. 5]. I think our showcase is us and this band called Jon Cougar Concentration Camp, who I think were on BYO [Records] in the early '90s, so Iâm pretty excited to see them.