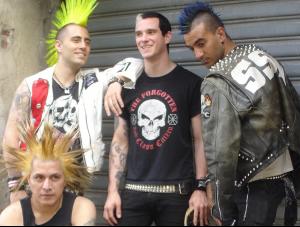 Contributed by ben_conoley, Posted by Ben Conoley Side One Dummy Interviews 12 years ago

In 1990, The Casualties started out with an idea was to return to the "Golden Age" of street punk which they felt that had been non existent since 1985. The Casualties took their high-energy street punk out of the gutter and into a long career of producing album after album and traveling thousands of miles a year to pursue their passion. To date the Casualties have put out seven full length albums (Along with three EPs, three Live albums and were included on 10 compilations), with their eighth full length album, We Are All We Have, about to hit the streets on August 25, 2009 care of SideOneDummy Records. The guitarist of The Casualties since 1993, Jake Kolatis took some time to sit down and talk to Jonny Taint about We are all we have, touring the world, and the misconception some people have about street punks.

Who long have the Casualties been around as a band?

The band started around â90 and it was Jorge and other members that have long since gone. It started out only as a couple of dudes in bands playing for bands. Even when I started in the band in â93 it was just a very small knit community of punk rock and there were a few bands, you know maybe three or four bands. They were just playing for the other bands.

Who were some of those bands?

These bands were Public Nuisance, The Denied, The Skabs, and you know just a bunch of smaller bands in that sort of style. It was just New York right then.

Was there a specific venue, house, or basement that The Casualties and those bands played at the most?

Usually there was a show here and there, but there was this one place - ABC No Rio. It was the place that was letting shows happen. There was New York Hardcore, CBâs all the time, but then there was our style of punk was more ABC No Rio at that time. We couldnât even get shows in CBâs yet, because we weren'tâ big enough to play there.

Whatâs been the hardest part of being an active punk band for so long?

Just keep on, keeping on. It doesnât get any easier and itâs hard to keep writing music that isnât repetitive. Itâs part of us and we will always be writing music even after nobody cares. Itâs hard to write songs that you already havenât written. You have to make sure youâre not just rewriting a song that you put on one of your first records or something. You have to make sure youâre not doing the same riffs, the same kind of stuff, so youâre not totally redundant. Thatâs why we feel that this one coming out is really diverse.

Thatâs a good segway, tell us about We Are All We Have. What do you think makes it such a great album?

I just feel like the bandâs been through a lot and weâre just are own little family. Thatâs why itâs called We Are All We Have. I feel like everybody can kind of relate to that. You know people out there that have their families that theyâre brought up with and they have that extended family. When we say We are all we have , We really are all we have. It kind of what keeps us going. The new record just has that whole vibe with it. We decided whatever we write weâre going to go with. Itâs going to be another Casualties record, but everybodyâs way into different stuff right now so we said " Ok letâs just write about all of it". It all just kind of came together like it did. Instead of thinking "Oh what kind of record should we make" I âm listening to Thrash metal now so we came out with, Jorge is listening to a lot of reggae and we came out with "In The Fumes", but those sounds are put out into Casualties form. Weâve all been dialed in right now, Rick is the newest member and heâs been in the bands for 10 years. This is the line up that has kept the band going for a while now. Thatâs why we did "We are all we have."

The Casualties have been touring for years. How much of the year do you spend touring?

At least half the year, we have a little down time writing so we didnât do a lot of touring last year. We just started hitting pretty hard in 2009 and I think thatâs going to carry on into 2010 for a while.

What is your tour schedule looking like to support We Are All We Have?

So far August is the west coast and that will extent August into September. Then Octoberâs Japan, Hawaii, Alaska, weâre trying to do Malaysia and Indonesia. After that in November weâre trying to go down to South America for a few weeks. Then weâll come back, do a couple of shows in December and in January of 2010 we have Europe. Then finally in February I think weâre going to come back and do another US Tour. Hopefully weâll get through it. With We Are All We Have coming out weâre stoked and just want to hit it pretty fucking hard with this one.

Of all the places you go on tour whatâs your personal favorite place?

I like Berlin, itâs cool because everybodyâs pretty much knows English not that Iâm one of those people that thinks everyone should speak English, it just makes it easier to get around. Not that I think everybody should know English, it just makes it easier to communicate. Berlin just has some cool little punk rock places. I always have a good time there. Thereâs Wild At Heart, itâs a cool punk bar. Thereâs "Trinkteufel" (http://trinkteufel.de), which I donât know how to spell, that place is just rad. The shows there are always amazing, so Germany is always fun, itâs easy, and you just know itâs always going to be rad. Hawaii is a really good time, because theyâre like "What the fuck dude", Hawaii, punk shows, thatâs just awesome. And then Japan is huge, we only go there once every two or three years, so those shows are always good. Thereâs a lot of places I like mainly being LA and Berlin right now.

The Casualties have a pretty diverse age difference at your shows. What is it about The Casualties music that continues to bring a younger fan base into your following year after year?

I feel like we just keep it real, we keep the sound to our core and to our core audience. We do some weird songs sometimes, but mostly we keep it to our core. Weâre not going to throw some weird concept dance album out there all of a sudden. We keep it pretty hardcore, when we said "Punk for life" in back in â¦fucking whenever, we meant it. Just that alone stands up pretty well for fans for a long time.

Itâs the consistency of the band that keeps people coming around. Also we choose to play certain kinds of music; we just keep the band current. Weâre not going to celebrating 25 years of blah blah blah. I hate shit like that. I donât want to play those retro festivals, so we can play with some old bands that just got back together for a minute. Weâre a current band, weâre still putting out records, weâve never stopped touring, and we never stopped making records. I donât want to be grouped in with the retro reformed bands. I feel like we always bring it live and some of those old bands just canât do that anymore. The day we donât believe in it anymore or the day itâs not fun, weâre not going to play anymore and that era of our lives will be over.

How do you feel about having an influence on people deciding to leave their suburban upper middle class families and living as a street punk, living under bridges and sleeping in the streets in the name of punk rock?

I feel like thatâs a common misconception. I feel like some kids might be rebelling against their upbringing, so they want to experience that life style of living under a bridge or something. To me you just have to do whatâs right for you. That idea is just wild to me, because I was brought up lower middle class, so I no idea why you would want to be poor. I always worked; I went out and got a job, pumping gas or whatever. I never once wanted to be some homeless dude. I never wanted to search around for a place to brush my teeth. I never have felt like I wanted that to be my lifestyle and nobody in my band really ever had to do that to that extent either. So I guess itâs more of a rebellion against their upbringing. None of us were brought up rich, so none of us know about that.

I also donât really condone that either. Itâs not something thatâs extremely punk, itâs more something someone might want to do for themselves to appear more punk?. Being punk is being part of a scene, a punk band, living a certain lifestyle that to me isnât like being homeless. I donât think that being homeless makes you more punk then someone else. I donât think you have to sell out to the man or something. Thereâs ways or doing stuff, you could be in a Collective, you could be part of a commune or something, and you donât have to give into that mainstream lifestyle. There are squatters over in Europe that are living in apartments nicer than ours. I think thatâs amazing, thatâs Punk Rock! Find an alternative lifestyle, not just giving in to the system.

I think when youâre homeless, living under a bridge, living that lifestyle doing drugs and everything else. Itâs couldnât be more convenient for authority to have reason to put you away. Or convenient for mainstream society to point at you and say "See that kids into weird stuff, heâs bad news" So no I donât think people should live like shit, I think you should make something of yourself without selling out. I think true punk people are always living outside the box. To be honest the kid living under the bridge isnât probably a Casualties fan and has some other issues to deal with. Itâs just a strange misconception that we would want someone to live like that to be punk. Thereâs living on the streets and there is living in the streets. Weâll never condone people to just be graveling for money, thatâs just not what weâre about. I would never do that, so I donât think other should either.

Check out our new record "We are all we have" thatâs coming out on "SideOneDummy Records", Buy it, steal it, download it, I donât give a fuck , just get it, enjoy it and hopefully weâll see you on the road.

Tours: ...And You Will Know Us By the Trail of Dead / Secret Machines / Future of the Left