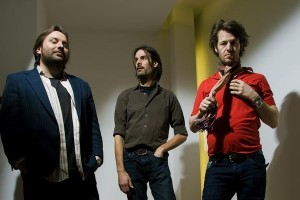 Contributed by shindo, Posted by Adam White Arts and Crafts Tours 14 years ago

Toronto's Apostle of Hustle, the Cuban-influenced side project of Broken Social Scene guitarist Andrew Whiteman, are headed out on tour soon alongside celebrated NYC gypsy punks Gogol Bordello. For the shows Apostle of Hustle will take the slimmed down form of a "drums/percusion vs guitar/sampler" duo. The bands will kick things off on October 3rd in Winnipeg, traveling west across Canada then down into the States. The tour will wrap on the 30th in Atlanta, GA.

Chris Rest (Lagwagon, RKL) joins No Use For A Name