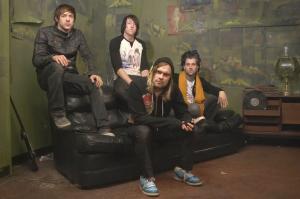 The Used are back with their fourth album, Artwork. Change was a consistent trend throughout the writing and recording process with a switch from long-time producer John Feldmann to Matt Squire, the creation of a much dirtier sound and the first album appearance of drummer Dan Whitesides to name a few. Whitesides has been instrumental in the new direction the band is currently taking. He took some time to sit down and chat with Mark Millard about the writing process behind Artwork, the adjustments needed in order to join the band and the motivation behind the changes they have made over the last few years.

What was the general daily writing process for Artwork?

It was a mixture, like we did some tour. I think (the tour) was called "Get A Life" or something and we actually started writing on that tour. From what I can remember, all of those songs; we actually ended up keeping them as B-sides. Then once we got off tour we went and wrote more, actually we were even writing before then. It was kind of weird, we had like a couple of these we wrote on the road. We wrote in Quinnâs basement. Sometimes it was all of us; sometimes it was just a couple of us.

Being your first full length with the band, did it take time to adjust to their writing style or was it simply a natural process?

Well, I actually came in about half way through Lies for the Liars and I helped write a little bit of that record. But by the time we went into the studio for Artwork, Iâd already been playing with them for about two years. So I guess Iâm just open-minded and all those guys are too so it was actually easy to adjust to their style.

Before going into the studio, what was it like touring with the band for the first time? How is your relationship?

It was amazing man. You know, to be honest, Bert didnât want me to be in the band; he didnât know me that well. He wanted to try and push the drummers and this and that, but Quinn was pretty much just set, you know? He wanted me in the band, and Jeph also. We were living with each other during Lies for Liars, so we had actually become pretty good friends so after the first show dude, Bert was like "Alright, itâs gonna work out" and we were just having a good time man. Like, I donât know if youâve ever checked out our YouTube, but thereâs tons of footage with us on the bus just partying and just acting like idiots you know; weâre just playing and having a good time.

Yeah for sure man. I remember back in the day always checking that stuff out when I was younger, itâs pretty crazy to see you guys are still going at it pretty hard and everything.

Yeah dude for sure.

So when you guys were in the studio, were there any musical revelations or discoveries? Or on the flip side, was everything pretty natural?

It was natural but I think that the last two songs that we wrote, "Blood on my Hands" and "Empty With You", theyâre the first two songs on the album and those songs took us like four hours total. We were in the studio, we had one more day that we were gonna be in the studio or something and theyâre like âwell youâve got a little extra time so just bust out thoseâ, and those two songs were just like boom. We weâre definitely feeling it that day.

And those are definitely two of the strongest on the record.

Yeah it was really crazy, those were really the only two songs that did that, other than that, everything else like I said, we were all over the place writing.

What was the motivation behind the switch from your longtime producer John Feldmann to Matt Squier?

I think that everything was, you know what I mean? Like we all agreed that we wanted to make a darker, not so produced, more live, dirty sounding record and at that time you know; I was a new guy, we had just fired our manager, so we just kinda wanted to wipe the sleight clean. We just got a call and decided we wanted to switch up our producer, and I think we needed it you know? And itâs not to say that we wonât ever record with Feldman again, it was just something that we needed to do.

Was it an easy process to adjust to his style?

Heâs so laid back man, like we were almost 80% done with the record. So we just went in and kind of told him what we wanted. And he was just like "All right sounds good to me." By that time we were in there doing pre production and he would be on his Blackberry, I donât know if he was texting or playing games but he would just be like "Oh that sounds cool, I like that", or he would say "Go from a C instead of a D," you know? So he would just feel it out, give us feedback and let us do our thing so it was great.

So you said one of the reasons he came in had to do with change. With that being said, what was the bands goal approaching Artwork? Was it to do something totally different?

It was to do it exactly the way we wanted to do it you know? The last album, Lies for the Liars, was written in the studio and so was In Love And Death. And so with this album we were just like you know what, weâve already started writing this record and we all knew what we wanted it do be. We wanted to have a real rock album rather than over produced; like albums use to be written, where you can hear mistakes in there and stuff.

What do you feel you bring to the table that Branden didnât in the past?

Well I know that, I wasnât there during all that, but just hearing stories from everybody; they werenât happy you know what I mean? And like they were riding on separate buses. At the time of Lies for the Liars they hadnât talked to each other in months and I think they were just really sick of each other. And ever since then weâve been chilled out, laid back, tighter and we all have a good time you know what I mean? So I think I bring just a better vibe to the band man. And weâre all hanging out together every day, like Jeff and I just went to Universal Studios together, before that we were at Bertâs house eating dinner, all the whole band. I think a lot of it just has to do with everybody getting a little bit older, you know what I mean?

Yeah man. You once played in New Transit Direction. How has your approach to writing been different on a project such as Artwork than the aforementioned band?

I think more about the song, and lyrics and vocals than I ever did before in my life. Actually, two months ago when I was listening to some stuff we (New Transit Direction) recorded right before we broke up, and every song was like six minutes long and I was like "Holy shit." I didnât realize it, we were writing six-minute songs. I think now, itâs more like ear to the point; verse, chorus, verse. I never really thought about that stuff you know? I think Iâm listening a little bit more. With those guys I think I was a little bit more of a leader, and in the Used weâre all equal but I definitely tend to follow Quinn and Bertâs lead.

Thinking back and listening to it now, what does Artwork mean to you?

Well itâs really satisfying to hear, I think that every song is different than the song before it, but somehow the record ties in. It all ties in together you know what I mean? To me, it just means anything and everything, we did this on our own terms, and we did it our own way with everything on this record. And the artwork for the album was Bert and Quinn collaborating with a guy at our label. I think that this album; itâs more about us, but itâs more about the fans. Weâve incorporated the artwork with anything we do online, so itâs more an album we did for ourselves but we also did it for the fans.

It sounds like it was definitely more of a do it yourself approach.

Totally, and I think we wanna involve the fans more this time you know what I mean? Like as we were writing songs and like pre production shit, I was putting little snippets up on YouTube and they were freaking out. I donât know, it was really cool to me.

Did the band head in to writing trying to make the songs more appealing to a live setting or did that not really come into play at all?

Nah not really, I mean yeah itâs good to be able to play what you recorded live. Thatâs another thing I think a lot of bands arenât doing anymore. But we didnât really approach it that way at all. We just kinda wanted to write a few songs and however they turned out we knew that we were gonna do them.

Do you have a favorite track on the record?

Well I love "Wateredown" man. We havenât played it live yet, but as far as listening to it, the lyrics are amazing to me. And that was the one song that actually we were listening to like some '80s songs and song '50s songs and so it has like an '80s/'50s vibe to it in some ways, but vocally and lyrically itâs the favorite by far. And to play live, weâve only played "Blood on my Hands" live and I love playing that song live.

And for you personally, once being in a band that opened for the Used, what is that kind of transition like: going to a band you liked and listened to, and then all of a sudden joining that band?

Yeah and you know, the thing for me was that I was a huge fan of the band before. Iâve watched them so many times and listened to all the albums a lot, but by the time we played our first show I was just like "Iâm playing for these guys and no one else." I was pretty confident, I wasnât cocky by any means, I just wanted to play well for them you know what I mean? So, itâs definitely a dream come true. I mean, I donât know if thatâs happened to anyone really, to be a fan of one of your favorite bands and then to be playing drums with them, itâs insane man.

Obviously youâve progressed a lot over the last few years, especially since joining the band; how have your own personal goals in the music industry changed since?

I guess my goal now is just to keep it going, and stay strong and progress you know what I mean? I donât really see any end in sight even talking to everyone else; this is just the beginning for us. So you know my goal I guess, is just to be as healthy as I can (laughter), so I can keep playing.

Cool man, thanks a lot for your time; look forward to seeing you guys soon.