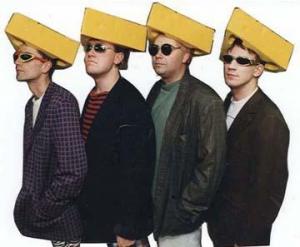 Growing up worshiping Pop-Punk Rock in the 1990s, Rev. Norb was as important a figure as it could get. The anticipation of his new article in Maximum Rock N Roll or awaiting his bands new LP or 7". With his band Boris The Sprinkler, Rev. Norb the self proclaimed voice of geek America released 8 LPs, 4 EPs and a very prolific 17 singles. The good reverend, was nice enough to talk with Michael Kane for an interview with Punknews.

First of all, thanks for giving us a little of your time today, and congratulations on your triumphant return at the yearly Insubordination Fest in Baltimore this year. It was a great show and you seemed as spry as ever.

You are far too kind, sir! I believe our show was adequate, given the conditions ((said conditions primarily being that, up until the afternoon before the show, the four of us had not practiced nor played together for over ten years)), although i am not sure i'd call it great…we practiced the set once on Thursday afternoon after the Pauls and i got in ((our bass player, Ric Six, now lives in Delaware, so we practiced in his basement)), and it was a little slow, but we thought that was okay, because we usually play things too quickly when we're on stage. We practiced again Friday morning, and that was about the same. We ate lunch, bought props ((mini-tramp, 72 rolls of toilet paper, "UFO UFO" sign fixin's)), and practiced the set a third and final time that afternoon, and that sounded perfect -- which, of course, frightened me, because that meant that we would wind up playing things at thirteen-zillion mph live, which we, of course, did. Ah well, they were ten minutes behind schedule anyway, so we probably did someone a logistical favor there. As far as being "spry" goes, wtf, dude, i could barely get my fat ass off the ground! I had to use the mini-trampoline to catch any air at all! And i almost suffocated when i had my pink zentai hood covering my entire face for the first few songs! However, i graciously accept your compliments, deserved or not.

Would you have boo'ed Dylan in Newport when he went electric?

Are you implying that i would have been attending an acoustic music event in the first place?

HaHa Oh, Boy. I read that you like to hit up baseball parks when in cities. what has been your favorite? i didn't know that people in Green Bay new what baseball is.

I more or less like any ballpark that was constructed prior to Jacobs Field in Cleveland, because, after that, they're all pretty much the same park with different bells and whistles (or, in the case of Comerica Park, different ferris wheels and whistles). I don't really have a favorite…i've enjoyed sitting in the top row at Shea and Wrigley and County Stadium in Milwaukee. However, for sheer surreality, you can't beat going to a Twins game at the Metrodome during periods of local disinterest. It's like watching a sporting event in a green-carpeted library, inside some manner of germ-proof bubble. But, that said, you can't really beat the $25 hot tub seats out by the big crown at Kaufmann Stadium in Kansas City. Anyway, I've been to home games of the Brewers (2 stadiums), Cubs, White Sox, Twins, Cardinals (2), Royals, Mariners, Reds (2), Tigers, Indians, Mets, Yankees, Phillies, Pirates, Orioles, Nationals, Braves and Blue Jays but they tore down the places at which i've seen the Mets and Yankees so I don't know if those count any more or not.

I just read somewhere that a kids parents sued a Little League coach and league for a collision that their kid had at home plate. What is this country coming to?

from is what happens in a world where Pete Rose is banned from the Baseball Hall of Fame!

What is the most you have payed to secure a vinyl record?

Twenty bucks, twenty-five bucks, something like that. I paid twenty bucks for the first Supercharger album on Radio X, the Monkees Head album with the Mylar cover, the Rotters Sit On My Face Stevie Nicks 45, and i think maybe $19 for the Dickies Fan Mail 45 with the poster sleeve. Actually I might have paid $25 for that first Davie Allan & The Arrows album, which isn't even that good, I can't remember if it was $20 or $25. I'm not a big believer in paying a shit-ton of money for a record ("shit-ton" here apparently meaning "more than 20 or 25 bucks"). The most anyone ever paid me for a record was $1000.

Whats your opinion on the people that try to collect every BTS, vinyl? Color, variant, etc.

I wish 'em luck! That was sort of fun while it lasted - the releasing of a bunch of weird variants and stuff - but, ultimately, sales gimmicks like that are kinda dopey. I can't speak for any of the other labels on which Boris released records, but, as far as the Bulge stuff goes, i never was trying to make things "collectible". I just wanted to have some fun with it. I mean, every time you need a thousand more covers printed, or a thousand more discs made, you have to re-submit the artwork anyway, might as well change it a little bit, just for fun, ya know? In the case of our 45s, I usually pressed the first 500 on colored vinyl, mainly because I thought colored vinyl was cool, but it's also kind of expensive, so if i just did the first 500 colored, then screw it, I've already got my cool colored copies, the rest can just be black, what the hell do I care? Once we started selling more records, then distributors started ordering more than the initial pressing of 500, and things got all screwed up, but before that it was fun.

Does an artists newer sub par work ever ruin their old work for you? For me Elvis Costello Is really close.

Nah, i just establish a firewall after which said artist's work is non-canonical in my eyes. Like, I don't listen to anything by Elvis Costello after Trust, although i do like the song "Beyond Belief," so, for me, that's the last Elvis Costello album…in this same manner, London Calling is the last Clash album, Busted is the last Cheap Trick album ((and only barely)), and DOA haven't released a record since the very early '90s.

In your opinion, what is the worst thing or crime a brand new punk rock band can do?

Be five years late for any particular trend and then give everyone else shit for not being "down" with this particular trend that you yourself are blatantly late for the boat on. Either that or put a pedestrian cover of a really, really well-known punk song on your first record. Like, i just got a debut CD from some band called the Fast Boys, and they cover "New Rose" by the Damned on it, and it's not even a particularly good cover. I mean, wha tha fahhhh? At least have the common decency to hit us with "So Messed Up" or something! Geez!

Do people actually think as a direct correlation of your song "Kill the Ramones" that you actually dislike the Ramones?

I think it's possible…i'm not sure what people think. That song was just supposed to be about some insane guy on drugs who decides to kill the Ramones before offing himself (or something). Obviously, if you know anything about the band, and me in particular, the Ramones were/are a huge influence and remain my favorite band of all time, so it would be unfortunate if people thought that. Then again, if you write a song called "Kill The Ramones," you're kinda asking for said interpretation, so ultimately that's on me. Note to God: You Can stop killing the Ramones now, and I was only kidding to begin with.

Should we expect anything new from Boris the Sprinkler or another LP from yourself?

From Boris, I dunno, probably not. The phones aren't exactly ringing off the hook with lucrative reunion album offers, which is fine, we're not a band, we don't really care. From me, I suppose I should release something else, but I deem CDs a dead format, and would like to release whatever it is I release as a vinyl/digital download type dealie, and for that I probably should have a website and I ain't got time for that so who knows. I did recently purchase a set of bongo drums so the world should be properly fearful.