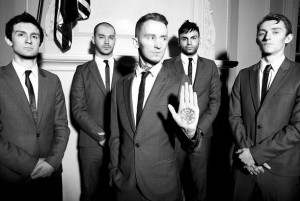 In a statement made via MySpace video in 2007, Brett Gurewitz, songwriter for Bad Religion and founder of Epitaph Records, suggested that Gallows' debut Orchestra of Wolves "is the best punk album to come out since the Refused's The Shape of Punk to Come." It's not that this statement is at all inaccurate; there is something undeniably revolutionary about this record's raw, aggressive energy. It's just that, considering their most recent release, Mr. Brett's comparison seems premature.

After signing with Reprise Records in 2008, Gallows was afforded the funding to write Grey Britain, a record that seems to capture the dynamic, dramatic, sometimes psychotic nature of the Refused's final full-length better than their previous release. Epic and operatic in scope, Grey Britain uses restless, heart-wrenching rock 'n' roll; somber swells of strings and piano; and the sounds of the streets (trains, sirens, and so on) to paint a bleak picture of Britain. As a band, Gallows has never hesitated to criticize what they love, whether it's the state of their homeland or the state of punk-rock. In an interview with Dane Erbach, drummer Lee Barratt discusses the motivation behind Grey Britain, their time on the 2009 Warped Tour, and why there's more to Gallows than merely making music.

Gallows has spent much of the summer on the road with the Warped Tour, which seems more controversial this year than in previous years. Describe what the experience has been like so far.

Itâs a bit of a strange time for a band like us. We feel a bit like weâre out there on our own, in the minority of bands who still want to play good music, who still want to play our own instruments. Thereâs a ton of bands on the tour this year that sicken the rest of Gallows and I because their music is basically shit. We canât even call it music.

I came across this band today called Breathe Carolina who Iâve luckily managed to avoid up until this week but, today, theyâre right by our merch tent and I have to hear them. It bums us out because loads of kids turn up to see these bands when proper good bands canât even draw fifty people. Bands like the AKAs and the Architects - good, solid rock ânâ roll bands - are lumped in on the same page as these fucking awful whatever you want to call them - bands, I guess.

In a way, though, it drives us on because it reminds us we have integrity. We know weâre better than these bands at the end of the day. And it drives us on because it gives us something to say. Weâve got a point to prove. We want to rid the fucking tour and the world of these truly shit bands. And weâre hopefully going to turn a few kids on this tour onto good, solid, heavy music without key-tars and auto-tuned vocals.

It sounds to me like the band has turned this into a crusade of sorts; do you feel like itâs your duty to steer kids away from this style of music and towards bands that are more traditional to the Warped Tour?

If we could turn a few kids, then thatâs cool, but maybe the battleâs lost already. These bands are the ones pulling the majority of the kids to the tour, and I think Kevin [Lyman, founder of the Warped Tour] realizes that. Probably everyone out here realizes that. But the music has gone so far down hill. Iâd like to say Gallows and a few other bands on this tour can kind of save it and people can see that thereâs real music real music on the tour, but thereâs too many fourteen year-old girls at this tour that think Breathe Carolina and Brokencyde are the shit. Theyâre never going to listen to Gallows and, if they do, theyâre going to think, "Why are these fucking scary Englishmen shouting at me?"

Does Gallows ever get in trouble for being so outspoken about bands like Brokencyde and Breathe Carolina? Do your opinions piss off the people running the Warped Tour?

I think if that were the case, Kevin would have said something by now. Every day weâve played, we have called those bands out. The tour is now six weeks in and heâs hasnât actually come up to us to say, "Stop calling out these bands; theyâre part of the tour too." I think he lets us get on with it because he knows that weâre so outspoken and, if he tells us to stop, weâll just carry on doing it more. I donât think thereâs much chance of us being thrown off the tour for calling these bands out. I think Kevin knows what we are. He still understands real good punk music at heart. We havenât got a problem with Kevin; we know that the tourâs a money-making business too.

And Iâm still glad to be a part of the tour, in a way. Despite all the shit bands, there are still a handful of good bands that we hang out with every day, like Alexisonfire, Iâve been a fan of their stuff since the first record - and Bayside. And you still have bands like the Bouncing Souls and NOFX and Bad Religion; I hate to say it, but their crowds have dwindled a bit even compared to two years ago. They still get a big crowd, but itâs still not the crowd it used to be. Days to Remember are another band weâve connected with; they do a kind of similar thing. Theyâre kind of in the hardcore scene, but theyâre crossing over now as well and are much more mainstream than Gallows now.

Do your opinions piss off the people whose bands you criticize? What happens when you see each other backstage or at the barbecue at the end of the day?

Normally, itâs just a daggers look. They know we donât like them. They keep their heads down if we walk past them.

It gets pretty tense, but no one ever really says anything to anyoneâs face unless thereâs a reason to. If Brokencyde wanted to, they could come up to us and say, "Why are you saying this about us?" But they donât, and I think thatâs mainly due to the fact that they know weâre right. They must know that the music they play is awful. I donât know how anybody in that band could listen to his own music.

I guess theyâre in it for something different. Theyâre in it for a party and for the money; theyâre going to be an overnight success and leave some kind of shit-crunk legacy that, unfortunately, a bunch of other bands are falling into as well.

Gallows performed on the Warped Tour in 2007 as well; do you think this yearâs experience has been better or worse for the band?

Personally, itâs been a much better experience than the first time. We didnât really know what we were doing back in â07. Last time we did the tour, our debut had only just come out; I think it had been out maybe a couple of weeks. We were on Epitaph back then and, of course, they didnât push our record as hard as Warner [Music Group, parent of Reprise Records] is pushing this new record of ours.

The crowds have just been bigger; more people just seem to know who we are. I guess Iâd say we have kind of a cult following now on the tour. I think people come to see us because they hear that weâre these crazy English guys and Frankâs outspoken.

It seems like Grey Britain has brought a lot of change for Gallows; since Orchestra of Wolves, how has the band evolved?

Since we wrote that record, we acquired Steph [Carter], Frankâs brother on guitar. He actually wasnât even in the band at all for that album. The rest of usâmyself, Lags [Laurent Barnard, guitarist], and Stu [Gili-Ross] on bassâwrote the majority of the music on Orchestra of Wolves and, after, Frank added his lyrics. It was all kind of thrown together in the space of maybe a month, that album. And, then, we literally toured it for eighteen months to two years because we released the album on a smaller label at the time. Then Warner picked us up and asked us to do another year of touring with it. By the end, we were pretty sick of playing most of those songs.

When we got asked to do the second record, it was just a totally new experience. They gave us maybe four or five months to write the record, so we camped up in a studio back home writing every day. Then we had two to three months to record it in this huge, big studio back home in London with GGGarth Richardson, whoâs one of the biggest producers in the world. It was a totally different thing for us to do; we didnât really know what to expect, having all this time to write. Because weâve been playing together for quite a long time on tour, we knew that when we got into the studio that weâd have a bunch of ideas. It would just be a matter of creating and album that was more based around the unity of the songs instead of throwing riffs together, which is what we did on the first record.

So, this experience felt pretty foreign for the band.

It did at first, because we were going in there with maybe ten different song ideas going on at the same timeâthere was stuff that we were writing sounded like Converge, stuff that sounded like the Deftonesâbut we had nothing tying it together. I think it was because we hadnât been in the studio for so long that we were just letting loose.

Frank wasnât involved in the writing process at all until after the first month or two. When he came in, he was like, âBoys, you have all these ideas, but thereâs nothing holding it together. Some of it is complete shit and you need to get rid of it.â He had a lot of the lyrics for the record written down. When we saw those and he gave us his ideas for what he wanted with the record, it was more of a natural thing. Weâd all come in together and get all the music written; Frank would be in there writing lyrics for songs as we played them.

It maybe felt a bit unnatural for the first month or two but, as soon as Frank got involved more, it felt like something we could do properly and the record became what we have now.

To someone outside the band, this might seem like a counterintuitive or tense way of writing a record.

It might seem like we donât, but we get along well. We all know when to get out of each otherâs face, which is the most important thing. We all have very different personalities as well. I think most people from the outside who didnât really know us as a band would ask, âWell, are they even a band?â because our personalities class quite a bit sometimes. When it comes down to it, we all look out for each other and make sure each other is okay. Thereâll be days when we hate each other, but it doesnât really affect the band to the point where one of us wants to kill the other person and the band breaks up.