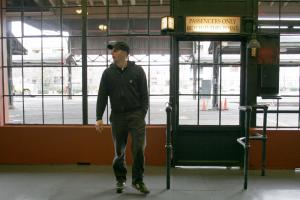 As Aaron Scott's solo project Attica Attica got ready to release its second abum, Napalm & Nitrogen (available from Red Leader Records here), Scott decided to take a fairly unorthodox approach to touring. Scott along with some friends will be touring down the East coast on their bikes. The tour, entitled "Ditch The Van" is being done to raise money for World Bicycle Relief. Scott will be providing Punknews with a series of Dispatches as he and his crew work their way through the tour.

I had a going away party at my house last weekend. My friend Matt made a T-shirt for me. Itâs gray and black, with a picture of a demon babyâs head. On the babyâs forehead, the number 666. Below the head, the words, "DIE NASTY." Itâs kind of awesome.

"Itâs something we used to say when we were growing up," he said. "âLive dirty, die nasty.â" Okay.

Despite the shirtâs excellence, I couldnât bring myself to pack it for the trip. Iâm not superstitious, but it seems a bad choice to embark on a somewhat perilous trip with anything that boldly insists: DIE NASTY. I could have rocked a shirt that says LIVE DIRTY, but I think wearing this gift would just encourageâ¦well, a nasty death. If I get splattered on the pavement in the next two months, the last thing I need is some cop guffawing at the irony that Iâm wearing a t-shirt that predicted not only my death, but also the nature of my demise.

Our mission is indeed dangerous. We are biking almost the entire length of the East Coast, from Boston to Key West. When I first thought about this, I imagined myself biking down the center lane of I-95, going 15 mph. Cars are hurtling past me on either side. My bike is shaking and rattling. An 18-wheeler is tailgating me and honking. I am screaming.

It will undoubtedly be less dangerous than that, but we still need to be constantly vigilant about our safety. As a string of recent cyclist deaths in Portland have reminded me, we are quite vulnerable on our dinky bikes. Additionally, the growing popularity of cycling has fostered a contentious relationship between drivers and bikers. Just last week, an argument between a cyclist and a driver in Portland ended in the driver putting his SUV in reverse and backing up very fast into the cyclist, knocking him off his bike and clean out of his shoes.

The danger factor has not been lost on my parents, who e-mailed me a week ago and insisted that I finally get some health insurance. I took a stubborn and brief stand, even using my age as a reason why it was a ridiculous demand. I sounded like Ariel from the Little Mermaid, insisting that a 30 year-old can decide for himself what is and isnât batshit crazy.

I eventually realized that Iâve always wanted health insurance and now would be a legitimately good time to pay up for it. In other words, I admitted that my parents were right. The problem with health insurance is that, once I discarded my sense of invincibility and admitted I needed it, sustaining an injury seemed way more likely. So getting the minimal emergency coverage with the $10,000 deductible felt pointless. If getting hurt is a real possibility, then shouldnât I pay more for some actual coverage? As if Iâm not already over-budget, now itâs as if Iâm planning on getting hurt. (Mom, if youâre reading this, Iâm not planning on it.)

Filling out health insurance applications wasnât in the original plan, but there I was at 2 AM, hours before my flight to Louisville, recounting all my past injuries so Blue Cross could analyze my worthiness. A bum knee. Messed up wrists. Dysfunctional lungs. Suddenly, I seemed like the worst candidate to self-propel himself anywhere, let alone from Massachusetts to Florida. Maybe health insurance applications are designed to scare us out of doing anything hazardous to our health. 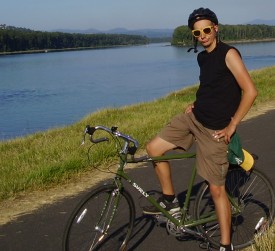 I wouldâve done the application earlier, but things have been pretty damn busy. In addition to booking shows, fulfilling my gear list and promoting the tour, I wrote and recorded a new record in the past month. This was terrible timing, but Iâm a man who needs a deadline to get anything done. Surprisingly, it is done on time. Not surprisingly, nothing else is.

Luckily, I am not alone in this effort. My friends Blake and Jon will be with me, and they are playing their parts as well. Jon is the cook, the quipster, and the all-around good-times man. Blake is the routemaster general, poring over bike maps and constantly readjusting our route to accommodate the shows that I book. This is more challenging than the average tour route, since shifting a show one day forward means figuring out how to squeeze 50+ miles of biking into the three or four previous days. Itâs complicated.

Blake was the mechanic on a Plea For Peace tour like this on the West Coast, so he knows what heâs doing. Heâs also a professional mechanic, so when we break down, weâll know what weâre doing. Yesterday, I learned how to remove my bike pedals with the help of youtube. I donât know what Iâm doing.

I called UPS to get a quote on shipping my bike. They said $138. Crap. Then they told me that, if I could make the box two inches shorter, it would be $60. I donât understand how this company became a global shipping juggernaut with a policy like that. An hour later, I found myself re-watching a blurry youtube video on how to pack a bike and swearing loudly and frequently as I tried to decipher this puzzle. The project was going poorly and I had no guarantee that it would all fit. The bike company packed the bike in this box when they shipped it to me. If it could be made two inches shorter, they wouldâve done so in the first place.

Two more hours passed. I emerged victorious, greasy and scratched up, with a box that looked like a child packed it. There is a strong chance that I damaged my bike in the process. But it was 2 inches shorter. When I got to UPS, a man named Jackson weighed it. 144 dollars. Wha? He said it had to be an inch shorter for the price to drop. I said something about going to Fedex. He said we could work something out, and asked permission to "retape it." I said he could. Suddenly, and with great force, Jackson started really giving my bike the time as he tried to retape the box. There is a strong chance that he damaged my bike in the process. He measured it again, and I could swear that it was exactly the same exact height as before. He declared it to be an inch shorter and charged me 84 bucks. What a guy.

And so, my bike tour begins with a flight to Louisville and cross-country shipping. As you can see, this tour is far from petroleum purity. I live in Portland, Blake lives in Minneapolis, Jon lives in Chicago. Planes, trains, buses and UPS trucks are all involved in transporting our belongings and us to and from this tour. Plenty of fuel will be burned as part of our overall effort. But if this tour is about anything, it is about possibilities, not about tidy solutions. If weâre serious about reducing our carbon footprints, then we need to try out some new ideas. Maybe this will work well, maybe it wonât. But if we donât even bother trying, then eventually weâre all going toâ¦.well, die nasty. And there wonât be anyone left to laugh at the irony of it all. Time to start riding.

Suburban Home to distribute novel soundtrack from Murder By Death