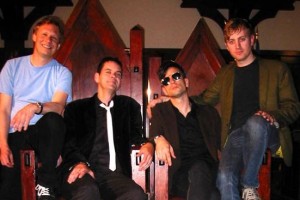 Having formed in 1991 in San Fransisco, Pansy Division were the pop-punk pioneer in the "homo-core" movement. The band was a Lookout! Records staple. Touring with Green Day at the height of their "Dookie" popularity just further added to the exposure Pansy Division would get and only made their voice, that much louder. It's not often that a band as socially important as Pansy Division comes along. They have had a very busy first half of the year, between a new LP, a book and a DVD, Pansy Division are as busy as ever. Michael Kane caught up with Jon Ginoli singer and co-founder of Pansy Division.

First of all, I loved the book (Pansy Division: Life In A Gay Rock Band). Having followed Pansy Division since the early â90s, what drew me towards you guys was your boldness and how "in your face" the lyrics were. With Green Day and pop-punk in general, blowing up, did you ever think "maybe if we tone it down a bit" we could be huge" ?

As indie/pop-punk bands got signed, we discussed the possibility of going with a major label, but figured we would always be the low man on the totem pole. To be huge, we would have had to change so much that it would have turned us into another band. The idea of mainstream success seemed pretty far-fetched.

When you started Pansy Division, were you aware of the social acceptance you could/would help bring to the gay movement, or was it just about making music?

It was both. For me they were inseparable.

How important to Pansy Division is it to make you records available on vinyl?

It used to be important. But our vinyl sales slowed considerably, compared to CD, so the three we released on vinyl in the â90s are all you're gonna get on LP. We did just put out a new vinyl 45 though. I like records, but most of our fans don't seem to want them on vinyl.

Being able to criss-cross through the country as much as you have, where is homophobia now in the US as opposed to 20 years ago?

There's less of it, overall, though there's still more in the deep South than anywhere else.

Being not only a musician but also a fan, does an artist's newer sub-par work ever ruin their old work for you? Elvis Costello is almost there for me and Rev. Norb swears the Clash didn't release anything after London Calling .

No, the old work doesn't get denigrated by later sub-par work. And even though I like the first three Clash albums best, I still like songs on their two later albums, but not the whole thing, like the earlier ones. Funny you should mention Elvis Costello. When punk was new, in the late â70s, everyone I knew who was into punk was into Costello too. But you'd never know that from reading MRR!

It was great to see you guys at Insubordination Fest. What were the rest of the crowds like on the tour? Any highlights ?

It got better as it went along, at the end with DC, Baltimore, and NYC being great, as well as Chicago and Minneapolis the week before.

Who was the last band you saw the blew you away?

Radio Birdman. Saw them twice since they reformed. The first time ranks as one of my all time favorite shows.

Being a pop-punk veteran, how important is Joel(former MTX) as a member of Pansy Division?

His pedigree with MTX is nice to point to, though it's all about sound, not history. We began playing with him out of convenience -- he was in two bands with Luis already -- but it worked out great, and his contribution to our latest album That's So Gay is one reason it's one of our best albums.

What can we expect from Pansy Division or you in the near future?

We just did an east coast tour in June, and in September '09 we'll do our west coast tour (find the dates at here. We've just spewed out a bunch of stuff recently! Besides the new album, the documentary about our band, Pansy Division: Life In A Gay Rock Band, came out on DVD earlier this year. Plus, my book Deflowered: My Life In Pansy Division, came out too. So it may be a while before more stuff makes it out to the public.