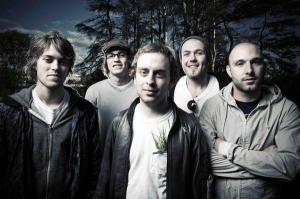 Fresh off their tour with The Swellers, Living with Lions are back in their hometown of Vancouver, British Columbia, writing the follow up to their debut full length Mark Your Mark. Prior to releasing their sophomore album in 2010, the band will be heading out on a fall tour with A Wilhelm Scream, followed by their first appearance at The Fest. Guitarist Chase Brenneman took some time out of writing to speak with Mark Millard about the bands new opportunities in the States, their writing process and The Fest 8.

What has Living With Lions been up to this summer?

We got back from a tour with The Swellers about three weeks ago now and since weâve been home, weâve just been writing a ton. Thatâs probably what weâre gonna continue doing until October comes around when we head out with A Wilhelm Scream and play The Fest 8.

You guys recently signed to an American label (Adeline), re-released the Dude Manor EP and Make Your Mark, and as you mentioned, just finished the tour with The Swellers. How has the reception in the States been thus far?

Itâs been really good. We toured the States a few times when we first started the band, but after the first few tours we decided we would wait till we could get our visas because we were too scared about lying to get across the border. [Laughter] But yeah, itâs been awesome. I think the first few tours helped out a ton and people have been pretty stoked it seems like, so weâve enjoyed it and we definitely plan on continuing touring the states as much as we can.

With that being said, you guys plan on writing until October. Being on an American label and now having a bigger following in the States, does the mentality change a little bit when youâre writing, or does it simply stay the same?

Itâs definitely different writing this record, I mean like weâre not the most experienced people at writing full lengths; the last full length we did, Make Your Mark was the first time any of us had ever written a full length and like worked with producers and stuff like that. I think the first one was like a writing experience for us and now weâre kind of in this mode where weâve done the EP on our own together, weâve done a full length with producers for the first time ever and gotten a taste of what thatâs like, and now we kinda know what to expect. So weâre definitely writing this record and itâs like a different feel when weâre writing the songs, but as far as a direction goes or anything, we havenât really changed. Weâre basically writing what we like, you know?

Do you guys ever set deadlines, or is it pretty much just whenever youâre ready to release it?

It usually helps if we do, weâre pretty big procrastinators. So it might take us weeks to write songs unless we have a deadline and plans when weâre recording. [Laughter] But I think by the time we have four or five songs down, weâll probably set a date to go into the studio; which weâre hoping will be early next year and weâll just take care of way more after that.

It pretty much works the same way, Iâd say. Theyâre actually pretty similar labels in a lot of ways. Like Black Box, they do a lot of management stuff and I know that Adeline also has a management firm thatâs involved with them, so they kind of take care of business in the same way. So itâs pretty similar and pretty easy to get use to dealing with both.

With Adeline being started by Billy Joe Armstrong, have you gotten to meet him or speak with him or anything like that?

No not yet, hopefully one of these days. Itâd be sweet to meet him because just like a lot of people, we weâre big Green Day fans. Dookie and all their records were pretty big for us, especially when we were growing up.

Right on. So obviously there isnât as much down time as youâre writing, but whatâs it been like being back in B.C for a portion of the summer?

Itâs been good; I mean the summer was pretty decent. It can get a little chillier now, but weâre in our practice space writing still. Itâs nice to see friends too, like weâve spent a lot of time on the road the last year and a half and this is gonna be like a two month break for us which we havenât had in a couple of years now. Itâs nice to kind of hangout and just relax for a while and not worry about getting all our gear together to go on tour or anything like that. So itâs definitely refreshing.

Iâm curious to hear what you think about the Vancouver music scene. Iâve heard you guys speak about it a few times before, and from a few other people Iâve spoken to that itâs not the best scene. Do you have any thoughts on that? Itâs definitely strange. Itâs different than a lot of places. On a small scale, like as far as punk rock music or punk bands go, itâs starting to get fairly decent, but itâs still not as good as a lot of the other cities weâve played, especially lately. The indie scene is really big in Vancouver. But I donât know, itâs a strange placeâ¦ Thatâs all I can really say.

Heading back on the road soon, you guys are playing the Fest 8 in October. Are festivals a thing you guys have done a lot before or is this all kind of new to you?

Festivals are pretty new I guess, I mean weâve only played a few festivals so far. Weâve liked them; they are really fun so Iâm excited, especially for Gainesville. All our friends have told us so much about it and how much fun it is and stuff, so weâre actually more excited for this one than any of the other ones. Fests are a pretty enjoyable atmosphere, you get to see a lot of really good bands play and itâs good to hangout for the day. So yeah, like I said man, we havenât done a lot of them but weâre excited for it.

Have you heard what to expect out of the Fest from anybody?

I know Brian from A Wilhelm Scream said it will be the best three days of our lives, so weâre expecting it to be pretty awesome.

Are there any bands youâre hoping to check out yourself other than just playing?

Totally. Other than the tour, Fest and just writing and trying to get the record done, what are your goals for the rest of 2009?

Well hopefully we can, after this tour in October, continue on and tour as much as possible into the New Year. And then I think the plan is to go into the studio early next year and continue touring, and hopefully by the summer of next year have a new record to put out and then just tour man. Thatâs basically all weâve got planned, just to be on the road as much as we can.

Music: Between the Buried and Me: "The Great Misdirect (Teaser)"

Exclusive Videos: Against Me! - live at the Fest 4