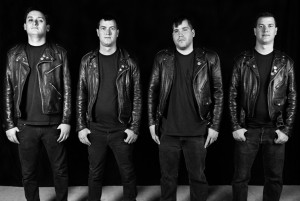 Teenage Bottlerocket released their Fat Wreck Chords debut today. Not only can you stream They Came From The Shadows on their Punknews profile page, but you can now do so while reading an interview with bassist Ray Carlisle. The interview comes courtesy of Punknews' Zack Zeigler.

Youâve got a new album that just came out, They Came From the Shadows. Whatâs changed with Teenage Bottlerocket between the release of Warning Device last year and this release?

Well, I think the biggest change was the fact that we didnât feel as much pressure with this record. We just wrote some songs and went into the studio and recorded them. With Warning Device we were following up Total and we really felt the pressure following up our album that kind of made us known to the general public and we felt the pressure of trying to top that record. And with this one we kind of wrote some songs together and went in and cranked out the full-length and we didnât feel any restrictions with this album because we sort of grew is a band and we broke away from the pop-punk template with some new tunes and there wasnât any restrictions as far as the songwriting was concerned. I mean, Iâd write a song and if everybody liked it weâd record it and same thing went with Kody, if he wrote a song and we all liked it we went in and recorded it and we basically broke out of the mold with this full-length and itâs different than the previous two. I think just growing with our music in general, being on the road together and playing songs together.

How did you approach this record differently from Warning Device?

The main difference was the time because in between Total and Warning Device it was almost three years then with this record it was a year and three months, or something. I think that that definitely influenced the approach. The approach for this record was, "Hey we just signed to Fat [Wreck Chords], letâs strike while the ironâs hot and get in the studio as soon as we can and crank out a record. First and foremost we like all the songs that weâre going in the studio with and as soon as we had that down we went in and did it. So the time constraint was probably the biggest difference on the approach. Like I said before, with Warning Device there was the pressure of following up Total and with this full-length there was a little bit of pressure, like, "Okay, this is gonna be on Fat, thereâs definitely pressure there. Theyâre a bigger label, a bigger label than Red Scare." There were definitely no restrictions or constraints as far as "Oh you guys are a Ramones-core pop-punk band." We wrote some songs you could definitely describe as unorthodox for us for a song on this new full-length.

What track do you think most broke out of the mold on They Came From The Shadows?

I would say "Fatso Goes Nutzoid" just because the drum beat behind the song, it isnât a rock beat, itâs a punk beat, I guess you could describe it as. Itâs faster.

In your new record you talk a lot about a relationship that went wrong. In America, the divorce rate is astronomically high, around 50%.

Well, Iâm going through a divorce right now so I feel that if youâre going to be happy without your wife, or sheâs going to be better off without you, itâs either the worst or the best decision. You know, Kody writes his songs and I write my songs and Kodyâs been in and out of some relationships lately and so have I but obviously with my divorce. I just think that itâs unfortunate that sometimes things donât work out but thatâs just the way it goes and we sort of write what we feel.

Obviously you guys donât set out to change the state of marriages in America through your music but what do you think the messages in the record contributes to that whole theme?

Well, arenât there some positive songs on this record? [Laughs] "Without You" is just a straight up love song and there is the conflict in the song with a girl but, I donât know, we donât feel any sort of constraints as far as "Letâs write a song about politics or some other topic," at the end of the record itâs like okay: half of the songs are love songs and weâre pretty happy that in the end because thereâs a lot of love songs on Warning Device.

Youâre touring with Cobra Skulls though, a band thatâs very outspoken, not your average punk band nowadays. Itâs no secret that they have some serious messages in their music. Can you talk a little bit about how you both fit together as bands, as people, as guys just trying to communicate a message?

As far as bands that weâve hung out with the Cobra Skulls are one of the coolest bands and their political messages in their music is always something that Iâve appreciated. First and foremost Iâm a big fan of the Cobra Skulls and especially their new record. Itâs going to be great to go on tour with them because we have the pop-punk thing going on and we have a completely different fan base, they have more of a political edge going on and hopefully combining the two bands at shows is going to bring a more diverse audience and everybody can benefit in the end and itâs just going to be a lot of fun.

You guys recently got back from Japan. How was your experience playing for the Japanese?

Japan was amazing. It was beyond all our expectations. The shows were great, we played this festival show with The Vandals and The Voodoo Glow Skulls and that show was fantastic. Then we played some punk clubs the following two nights after that and both shows went off. We definitely felt privileged that we got the opportunity to go out and do something we always wanted to do. It was badass, man.

Most bands have them, got any horror stories about Japanese food/bathrooms/strange customs that caught you off guard?

We were at this sushi restaurant and it was the train-style sushi that goes on the little conveyor belt and there were these live crabs that people eat and they crawl around in their mouths and that seemed pretty strange to me.

Did you try it?

No, I didnât see anybody else try it either. [Laughs] They kind of looked like they were sitting in there for a while.

As far as normal stuff the toilet we had in our hotel was fucking awesome. Now we all want one of those.

Alternative Press called Teenage Bottlerocket a "Band You Need To Know in 2009." How have you guys reacted to that? Have you noticed an increase in kids coming to shows? More of a positive reception since theyâve said that?

Well we havenât done anything in the states since we recorded They Came From The Shadows and [the AP article] came out after that but we definitely had a huge response in Japan. I think it had a lot to do with Fat Wreck Chords and the anticipation of us finally being able to get over there. Ever since the band started in 2001 itâs always been these stair steps up and the shows have been getting bigger and bigger. I donât think AP has come into play since we havenât played any shows since that magazine has come out with the exception of Japan but thatâs cool that they said that.

Going back to the record, whatâs your favorite track off of the new release and why?

My favorite track is "Bigger Than KISS," the lyrics are hilarious. I think itâs the best lyrics that Kody has ever written. We got a MySpace comment where this kid was like, "You guys will never be bigger than KISS," and we all started laughing. I think if youâre a KISS fan listening to the song and hearing the lyrics, itâs something that even a KISS fan could appreciate. Thatâs definitely my favorite song on the album, I think itâs not like a straight up pop-punk song, three chords, itâs a little more unorthodox.

Where did you guys record and who produced They Came From The Shadows?

We recorded at The Blasting Room in Fort Collins, Colorado. The guy that recorded all the songs was Andrew Berlin. If we were going to pinpoint a single producer it would be our drummer Brandon [Carlisle]. We produced the record ourselves.

In October you guys are playing with the Dead Milkmen in Chicago. Any expectations for that gig?

Itâs going to be our second time playing at The Metro and we love Chicago, itâs our favorite city to play. I just expect it to be a lot of fun. Weâre looking forward to it. I think as far as expectations go we just love Chicago and love any opportunity to go out there and play in front of those guys.

So you guys are touring pretty endlessly through the end of the year. That seems to be the state of punk music nowadays: release, tour for about a year or a year and a half to support the release and then get back in the studio. How do you guys feel about that model thatâs seemed to prevail recently? Are you easy to tour as, as a band or do you get restless? How do you guys work on the road?

Well, Brandon and I are twin brothers and we fight like brothers. Weâll have this huge explosion and then five minutes later weâre laughing about it so itâs never this huge deal. We respect each otherâs boundaries and weâve learned how to be on the road with each other in the past five years. We know how to piss each other off so we just avoid going there whenever we can. Itâs pretty simple, you know? We just try to put on the best show that we can every night that we play.

Check out They Came From The Shadows. Weâre totally proud of it. I think itâs our best record, everybody says that about their newest record but we totally believe it this time. I think that people are going to be stoked!

Streams: Teenage Bottlerocket: "They Came From The Shadows"