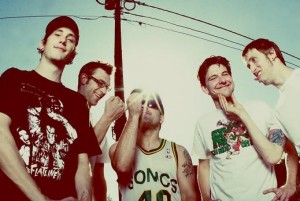 Contributed by ben_conoley, Posted by Ben Conoley Paper and Plastick Interviews 13 years ago

Massachusetts-based punk unit A Wilhelm Scream will make an appearance at Gainsville, Florida's Fest festival this year, marking their second time on the bill. The show will happen shortly after their first release for Paper and Plastick Records, a self-titled, 5-song EP, hits stores. Laila Hanson had an interview with guitarist/vocalist Trevor Reilly about the Fest, the upcoming EP and more.

Out of all the festivals you've played, what stands out about The Fest in your mind, as far as how its organized as a whole? What makes the experience different from something like Warped Tour?

Last year was our first Fest experience, and was so much fun we went over our time limit and subsequently stopped "The King is Dead" right quick! They run a tight ship! We shouldnât have tried to squeeze 14 songs in a half hour, (Ha!) but that show was wicked, man. The whole weekend, just tons of cool bands, lots of cool venues all in walking distance. Me and Dave Kloc, our merch guy, got to check out some rad bands at this little bar in the middle of the day and grab a brew, and I got exposed to some cool bands like Liquid Limbs that I donât know if I would have heard if not for the Fest. I think the bands are happy and comfortable, thereâs no real stress involved in it. Youâre not out in the blazing sun if you donât wanna be, thereâs no emo bands, no commerce in your face, and good food everywhere. [Fest administrator]Tony told us this year weâll be playing longer and later. So weâre thinking weâll start with "The King is Dead" this year, right where we left off!

You've been together for over a decade now as a band. What's the trick to making the dynamic work between everyone and not wanting to kill each other or break up?

With Wilhelm and Smackinâ Isaiah, which is the same band to me, we always put the focus on writing new songs to stoke us out. Thatâs why I got into this in the first place 15 years ago. I believe that the best way to make it work is to have everyone involved, adding what they can to the band and as long as everyone shares in the workload equally, we all enjoy the party, the reward, that much more. And the party for us is the live show. And weâre seeing the world. As the years have gone by, friends have had to leave the band to pursue other dreams, but I know if you were interviewing Jon and Chris right now theyâd tell you how much this meant to them and how unique this lifestyle is, and how hard it is to give this up. And when you get fresh and rad new talent like Mike and Brian in the band it opens up limitless possibilities of what we can do with brand new songs, and weâre obviously a band thatâs in it for the art, âcause it definitely ainât the money! Hahaha.

What led you to switch to Paper+Plastick for your upcoming album? Are you planning on sticking with Vinnie [Fiorello, label founder] for awhile?

Our contract with Nitro was fulfilled, and I want to take this opportunity to thank them for everything theyâve done for us and all the time and money they invested in this band. They allowed us to be us without any hassle, and they got the band that they signed and Iâm proud of that. We did things the right way and that means a lot to us, but it had run its course. Vinnie approached us quite a while ago about working together on something and I always thought it would be rad to do an EP with him, something with nice packaging and no big stress for the band. We havenât done one since the Smackinâ Isaiah EP, The Champagne of Bands. Thereâs something cool about recording five songs for a project. Itâs a different dynamic. Gives us a chance to try a few new things, and in our case, gave us an opportunity to get our feet wet writing and recording with each other. Like I said before, everyone in the band contributes to the songwriting. I might direct the proceedings, if you will, but thereâs something about five men on a mission, with distinct musical personalities working toward the same goal. The finished product becomes something special. And we hope our fans feel the same way about it that we do. As for working with Vinnie in the future, weâre open to see how it goes with this and take it from there. Heâs a friend. The way he talks about his label is inspiring. Weâve toured with him and I know heâs a workaholic and I dig that. But generally I try to stay away from making decisions like this until the songs are completed, so weâre working on those now. The full length is in the works, friends.

Have you been playing any of the songs from your upcoming self-titled release live yet? Do you have any titles or themes you want to share?

Weâve played this new song "Australias" at a few shows so far. Itâs the first one weâve completed with this lineup that me and Mike started writing, ironically, in Australia! Iâd love to play them all. We got a couple of bangers on there in the vein of The Rip and Check Request Denied. Then we got this song Fun Time that shows my pop rock leanings. Sounds like a Dinosaur Jr B-side. (I should be so lucky!)

Is it important for you to stick to the roots of punk? Do you ever think you'll experiment with other genres that are completely out of your element?

Itâs funny, ya knowâ¦ when youâre writing songs youâre offering up your influences through your own personal musical filter, if you will, and from my perspective Iâm playing chords from my rock heroes that left an imprint on me. For example, we got this new song Bulletproof Tiger, and when Mike and I listen to the guitar work on it, and when my dad listens to the guitar work, itâs sounding like a Catherine Wheel song to us. And I love that band. Itâs alternative fucking shoegaze rock and we love it. Listened to their Chrome album every day on the way to the studio. Now, Iâm gonna go out on a limb here and assume most of our fans have no idea who the fuck Catherine Wheel is, but if not for that band, our song wouldnât have come out the way it did. Fuck, I might be teaching English class right now. And thereâs so many bands that had that effect on us that you would never consider punk. But we got that angst about us, always have. We want to spit fire all the time. Thatâs our therapy. It comes out punk rock. Nunoâs voice, itâs punk rock and itâs all soul. I canât sit here and downplay the influence bands like Bad Religion and NOFX had on us coming into this. Punk In Drublic? Stranger than Fiction? We worshiped those records just like everyone else! Angst, melody and speed. Samiam! Bodyjar! I could go on and on all day. Those bands made albums Iâd put up against the Beatles or whatever any day of the week. But I also canât sit here and tell you Iâve really listened to the last who knows how many Nofx records that have come out yet the average listener is gonna assume weâre a skate punk band while in our own bubble we feel like weâre doing some really different shit. Admittedly, our last record was all fast. We wanted to make the best fast melodic punk record ever made while recording that. We were showing off cuz our new bassist was a fucking machine. He came from the fuckinâ Fullblast, ya know? But Wilhelmâs always been a weird band. A.D.D. style, gotta throw the monkey wrench into the songs. Gotta throw the kitchen sink into the songs. Thatâs where all the other influences come in, and the musical themes change on every record weâve ever made cuz we donât want to make the same one twice. The only skate punk we really have been listening to the past seven years are demos kids give us at shows. And we appreciate them and listen to them all when we can. But those big punk bands got to us at a critical time in our musical development and itâs in our DNA. There was something about it that stoked us the fuck out. But that scene got watered down and terrible a long time ago, just like every genre does. You ask if it is important for us to stay true to punk, but from our perspective weâre just writing Wilhelm Scream songs, regardless of what type of genre anyone could attribute them to. Every record we make alienates some people and brings other people in, itâs always been like that and I donât think that will ever change. Having said that, we have a really hard time slowing our songs down. And I blame Pasquale for that!

What's your dream tour lineup, if you haven't already had it, and why those bands?

Propagandhi is still on our list. Their camp offered us a tour with them recently, which we were jazzed about, but we were already booked up. We hope to take a rain check on that as they kick so much ass. Iâd like No Trigger to get back in action too, the scene needs them. Of course, Iron Maiden and Bad Religion would be nice, I donât think that needs an explanation though, does it?! But I think Iâve said that in every interview at this point! Whatâs up, Brett Gurewitz?! No love for the Scream.

If you had to choose a modern day mainstream song to cover, what would it be and why?

Probably one of those Budweiser Real Men of Genius commercial songs. That would be a fucking blast. The possibilities would be endless. That song "Thatâs Not My Name" from The Ting Tings would be a cool song to fuck around with. Iâd have to listen to FUN107 more to give you a definitive answer on that one. Please donât put me through that.

Feel free to add anything else that hasn't been covered in these questions!

Thanks! One thing Iâd like to mention, since we havenât made this clear yet, is that weâll be including a CD version of the new EP with the Vinyl, in the packaging. That was the first thing I talked to Vinnie about early on in the process, as I knew that would be a concern of a lot of our fans. They wanna blast that shit in their car, right away. I know I would.

The Static Age give away new EP