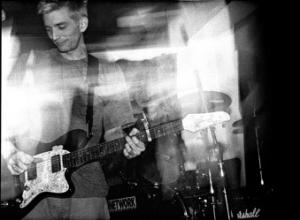 by Adam White Epitaph 13 years ago

Exclaim is reporting that The Weakerthans frontman John K. Samson is set to release a series of 7 inches in honour of the roads of his home province of Manitoba. The first will be a three song set titled City Route 85. Germany's Grand Hotel Van Cleef Records will release the disc on October 30th, with releases on Epitaph / Anti to be announced. Samson told Exclaim:

[The release is] the first part in a planned series of three or four seven-inches I want to write and record about different roads and highways in Manitoba… City Route 85 is otherwise known as Portage Avenue, one of the main streets in Winnipeg, and the songs are set in three different locations along the avenue. The next two releases will come out sometime in the [next] 18 months, I hope, and will be set north and southwest of Winnipeg.

The Weakerthans last released Reunion Tour in 2007. John's last solo release was Little Pictures, a 1993 split CD with Painted Thin. It was re-released in 2006 on G7 Welcoming Committee Records.

Goodcore to release Ryan's Hope's "Apocalypse In Increments" on vinyl