Via an Anonymous Source, Posted by Ben Conoley Dispatches 12 years ago

British singer-songwriter Mike Scott is currently on tour with Kevin Seconds. Mike has been kind enough to provide us with a series of Dispatches from the tour, the first of which we bring you tonight.

"Whatâs the matter, donât you like ladeez?" was the call from a sketchy looking, greasy guy from the entrance to one of the red light district brothels as myself, Kevin Seconds and our driver Rob took a walk around Amsterdam. "Not really when they are for sale, have no interest in their work and look bored as hell" should have been the answer, but "no" did nicely too. "Weâre off to the gay cinema". Amsterdam central is basically an extension of England from what I can see, which explains why about a third of the crowd at the show was English or American.

We played the Winston Kingdom, a cool little venue attached to a hotel and an English bar. Kev had travelled the best part of 24 hours, across 2 flights. Me, Rob and our merch guy had got up at 5am, but due to vehicle difficulties, the ferry sitting motionless for an hour and half and a sketchy couple of turns in France, didnât arrive until 8.40pm at the venue. But it was cool, in typical laid back fashion everything was running late. I got there in time to see my label mates Antillectual play a fine acoustic set, before myself and Kevin played and whored our new split 7" between every song.

Our merch guy, who would like to remain nameless for his exploits, went for a âquick smoke in a coffeeshopâ before his duties. Like the true arrogant Englishman, chose the strongest weed he could get and passed out on the coffeeshop floor apparently, thus ending his evening at 10pm, 1 hour 20 minutes after we arrived. Me and Kev may be vegan and straightedge respectively, which doesnât make for ending Amsterdam to its limits, but we had the last laugh. We didnât pass out on a coffeeshop floor. 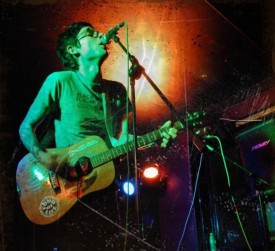 Being kicked out of the hotel at 10.30 the second morning of the tour meant we had 8 hours to travel that gruelling 1 hour journey to Rotterdam, for the first of 2 shows with Fake Problems. So we rocked up to the venue at 11.45am. Needleless to say the staff we overjoyed to see us, and politely sent us to the hotel to sort our lives out. A power-sleep later and we all looked like shit, but took a walk around Rotterdam sketchier districts, in need of a real coffee shop. That sells coffee. Preferably with soya milk. We conceded defeat and went back for soundcheck. The comedian of a soundguy made some serious mileage out of how quick it is to soundcheck one guy and his guitar. Never heard that one before.

The venue (Watt) is fucking sweet, the sound was sweet, the smallish but eager crowd nicely stocked up on merch, and everything was good. Fake Problems were great. Kev was great. Hell even if I had a good set. But Rob realized we had locked ourselves out of the car. Which put a downer on the evening. Seeing Kev try to break back into the car with the tried and tested coat-hanger through a tiny gap in the back window weâd managed to get was a once in a lifetime. In the end, a random guy came over and said he could break into our own car for us. We took him up on the offer. He dislocated his arm, which was pretty sizeable, reached into the tiny gap in the window and opened the door. Good lad. He demanded âFive feroâ several times before we realized what the hell he was on about. We paid him, gave him a couple of beers and sent him packing. We thought it was all sorted, until we realized we couldnât turn the alarm system off. We got given pity beverages by a very kind and not unattractive promoter. The alarm sounded for an hour, until we disconnected it. Which just left the small matter of the hazard lights. We drove back to the hotel with the hazard lights on, parked up and myself and Rob enjoyed a couple of stiff drinks before bed.

I write, we are sitting in the hotel room, waiting for someone to come and sort out how to turn the fucking hazard lights off while driving. Still, only need to get to Antwerp 60 miles away, so all is goodâ¦The glamorous life of punk rock.