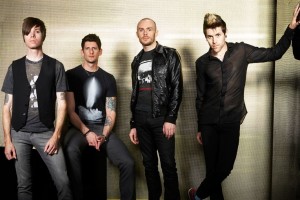 Whether you classify AFI as hardcore, goth, techno, punk, alternative or progressive, over the years their sonic evolution has created as many new fans as it has surprised the old ones. Tomorrow, A Fire Inside releases the newest entry in this continual progression: Crash Love. Punknews interviewer Jason Epstein had a phone chat with AFI singer and songwriter Davey Havok about the band's past, present, future and their new album, Crash Love.

AFI usually writes dozens of songs during the album sessions, but only some of them make it to the album. What happens to the rest and will they ever be released?

Some of the songs that we write never actually make it out of the room in which they are written so I think for Crash Love for instance we wrote over 60 songs and maybe 40 of those songs actually made it into the rehearsal room and were worked out entirely as a band and out of those only a few of them ever end up being tracked. So, thereâs a lot of songs that will [not only] never be heard by fans, but will never actually even be heard by half of AFI. The songs that do get recorded will very likely be released in some way. With Crash Love I was just speaking with another person about the "cocktail" version of the record that is going to be released on iTunes which contains I think five of the songs that we demoed for the record. Five or six or fourâ¦some number over threeâ¦that are demo songs for Crash Love that didnât make the actual record. [These] are actually songs that I really, really like so Iâm pretty happy about it. â¦

What are some of your favorite AFI songs to perform live?

Right now itâs Medicate. Weâve been touring Europe a little bit, weâve played a couple of festivals [including] Reading and Leeds and a few club shows and the only new track that we have performed live is Medicate and thatâs by far the highlight of the set for me.

Awesome. And maybe I should re-phrase that. How about some of your all time favorites?

Are there any plans to bring back some oldies to play on your upcoming tour of the U.S.?

We really donât plan that in advance, itâs just a matter of going to rehearsal and seeing what feels right to play. Itâs very difficult to insert "oldies" into our set because they really sound inappropriate in the context of the band that we are today to be playing an early 80âs sounding hardcore song from the early 90âs against something like The Interview. It does sound strange so itâs difficult to navigate that flow while including songs from 1995. So, on the recent shows that weâve been playing we actually very literally played one of those songsâ¦you know one of those first songs that weâve written which I think was written in like 1992. Weâve been playing Love Is A Many Splendored Thing which is a hardcore song.

Yeah I did actually see a couple of videos of that, thatâs pretty cool. Thatâs an old one.

Itâs really, really old, I was very surprised to see it-

I remember the first release of that song was taken from a cassette tape that we recorded on a little box in Markâs like foyer of his parentâs house. We recorded it on a little tape and somebody released it on a comp.

Oh, that must have been a really excellent recording studioâ¦

It sounded greatâ¦but you know for that song, who cares? We thought it sounded the best it had ever sounded on that tape.

Okay, so the whole context thing kind of gives me a lead-in to my next question: Years ago AFI had lyrics like "Hatred poisons me through and through/A sustenance keeping me true" and now thereâs a different style of intensityâ¦lyrics which seem to have changed to more along the lines of "Will the flood behind me/Put out the fire inside me?" So, what do you attribute that to?

I really attribute it to experience and the time of my life. They go into creating the lyrics Iâm writing at the time. Itâs really interesting that you bring up that specific lyric from Triple Zero because I was just thinking about it very much in those terms the other day in the showerâ¦I donât know why. [Laughter] I just thought back and thought of how very, very visceral the lyrics were at the time and really the way I write is just a product of what I feel, how I want to express myself and what I feel happy with as a literal expression of my feelings and my perspective at the time. Itâs just a matter of changing and growing artistically as a lyricist.

Decemberunderground was a somewhat electronic influenced album and Iâve heard that Crash Love contrasts by giving off a more straightforward rock vibe. Was that a purposeful move?

It was not a purposeful move. It is the case, definitely Crash Love is a more guitar-focused, guitar-based record than Decemberunderground was. I think what that is a result of is Jade and I having toured for two months and recorded the CexCells record [with] the band that he and I have that is an electronica outfit. So when we sat down and began writing Crash Love it was refreshing to be playing rock and I think that having done Blaqk Audio, it rejuvenated our interest in rock. Blaqk Audio was already entirely purely electronic but coming from that sitting down and writing rock we just didnât have as much inspiration to insert those electronic [sounds] into the rock music that we were playing. But it wasnât a conscious thing.

Would you say that the evolved sound of Crash Love signifies a return to roots or a further progression?

I donât really think itâs a return to roots; I would really describe this as a rock record, a really straightforward rock record. I donât think weâve ever recorded one of those before, weâve released hardcore record and weâve released very multi-layered alt-rock records but this is the most straightforward rock record I think weâve ever written so for us that is another matter of progression. Certainly creating a rock record is nothing new in relationship to the greater world of rock music but for is itâs something weâve never done before so itâs very fresh for us.

Can you describe AFIâs songwriting process? Does it differ from album to album or involve band members in different ways?

Itâs very much the same. The start of the song comes from Jade and I sitting down and him playing guitar and me coming up with melodies over the parts that we are constructing. From that, that night Iâd go home - well not home, you know we stay in Los Angeles - so I stay in the hotel room Iâm in and I review the melody and put lyrics to melodies and weâll review what weâve done the next day. From there when we have a group of songs that he and I feel are strong we get together with Hunter and Adam and then we all work it out and the songs go from there and that continues until we have a larger group of songs that we all feel are worthy of recording. And then we record them. So that process seems to take about nine months.

The gestation of a little AFI album baby. [Laughter] All nine months of it.

Do you or any other members have any pre or post shows customs, any specific way of pumping up or winding down?

Um, no not really. I mean we all stretch. Itâs a very physical performance for all of us so we all get our bodies ready in that respect but thereâs no ritualistic event or hand holding or chanting or anything like that. Afterwards itâs just a bunch of towels and hydration.

Oh towels, I though you said howls.

I was like, no ritualistic stuff but thereâs howling?

In 2007 there was some talk of an EP being written from leftovers of the Decemberunderground sessions. Did that turn into Crash Love?

No, by no means. There were b-sides that were going to be released on an EP but we hit so many problems along the way that we just put it aside. Those songs are actually coming out on certain versions of this record; they might be coming out as b-sides in England. There were I believe three songs from Decemberunderground and maybe one from the Sing the Sorrow outtakes, maybe two but they will be released.

Yeah, on iTunes as well?

Umâ¦I donât know! [Laughter] You know thereâs so many versions of the record now and thereâs such a need globally for universal releases for the b-sides that I canât really remember what goes where. Iâm pretty sure whatâs on the iTunes release Iâve seen, I think those are all Crash Love b-sides which, in my opinion are the best ones with [one] exception; There is one song that didnât make it to Decemberunderground which is actually personally one of my favorite songs that weâd written for Decemberunderground and that will come out sometime somewhere too, I just donât know where.

Okay. What is your least favorite interview question of all time?

Are you going to ask it or you want me to-?

Oh no, I donât know what it is. Iâm asking you what is it that people have asked you that youâve just been like âAh, my god Iâm sick of this!â

Pretty much any question that has to do with the way I look that includes the word "why". [Laughter] That I just donât like, I never have. People have commented on the way I look and asked "why?" since before I was a teenager and itâs just tiring. Whether or not itâs coming from a perspective of âI appreciate the way you lookâ or âI donât like the way you lookâ itâs like goshâ¦itâs just astounding to me that that is a concern.

Gotcha. Well my questions have nothing to do with that.