Contributed by sawwheel, Posted by Ben Conoley Interviews 13 years ago

Some bands labor for years in obscurity before writing an album that makes people take notice, while other bands find a sound early on that resonates well with listeners. Oklahoma City's Red City Radio are a band that came seemingly from out of nowhere this year with a stellar EP titled To the Sons & Daughters of Woody Guthrie and began attracting attention from many people, including the fine folks at The Fest.

Recently, Red City Radio toured in support of their EP, and RJ Cresswell had a chance to chat with guitarist/vocalist Paul Pendley at a construction site in Austin, TX across the street from Snake Eyes Vinyl.

Introduce yourself and tell us a little about your band.

My name is Paul Pendley. I play guitar and sing for Red City Radio. Weâre from Oklahoma City, Oklahoma. Weâve been a band for about two and a half years, but we werenât really a band until we found our bass player. He was the missing piece of our puzzle.

Is there a story behind the band name Red City Radio?

Itâs actually a play off of Dead City Radio, which is a William S. Burroughsâ spoken word album. But we come from a red state, weâve got red clay, and itâs home of the red man. There are an awful lot of puns there; I apologize for that.

Oh, thatâs tough. I donât know. We have four songwriters, so it kind of changes. Every time someone tries to describe what they think we sound like itâs always different. My personal favorites are Bruce Springsteen - Iâve also heard Choking Victim, which I never really got. Someone said we sounded like Braid, and I like some of Braid, but I just donât hear it. Itâs all over the spectrum. Youâve just got to listen to it.

How does having four songwriters work for the band? 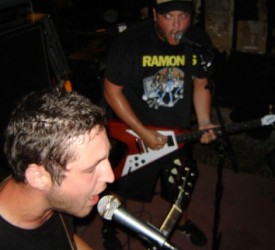 Itâs an open-ended thing. To be honest, our bass player and our drummer do not really come to the table as much as Garrett, who is the other guitar player, and me, but itâs an open thing, so they have come. Basically, people come with riffs, or ideas, or melodies, and they play them, and itâs pretty democratic. We vote, and if everyoneâs down with it, we start working it, and everyoneâs input is involved. Itâs not like, "hey, I wrote a song, and this is the way itâs going to go, and youâre going to write this bass part, and I want the drums to sound like this." I hate to use the word organic, but itâs very collaborative. We donât leave options out like if someone has an idea, and itâs contrary to the original vision, weâll always try it out, and fifty percent of the time the new idea works.

Every person in this band has fronted their own band, and theyâve all played guitar and sang in their own band, so when someone has an idea we listen because theyâve done it before, so yeah, thatâs kind of how we do it. We donât have any set way of doing it. We just kind of jam.

How long have you guys been playing together?

Dallas and I have been playing together for about three years, but I donât think we became a full band until we got Jonathon and that was about a year ago.

Tell us about your hometown scene.

Itâs tricky. Oklahoma City has an amazing live music scene, but thereâs no set genre. Thereâs not like a punk scene or a hip-hop scene or a metal scene. I mean there are small groups of people that go to those shows, but itâs just music. Thereâs tons of it. To say thereâs a punk scene in Oklahoma - I donât know. There are some punkish bands. Itâs a small, big city, and it works.

Do you guys have a band philosophy?

We love music. We love to play good music. You can talk to any member of this band and ask them what are they listening to right now, and it could be Jedi Mind Tricks or the Avett Brothers or Regina Spektor or the new Strung Out. We all love a variety of music. We love country music. We love hip-hop. I especially love soul music. And we all grew up listening to punk rock. Iâd like to think that it forms what we do, but I donât know if it shows through. But if you rode in the van with us on tour, you would listen to a whole lot of music that was not punk rock based.

What do you and your band mates do when you're not playing with Red City Radio?

Not much to report here. We work. We drink. We play music. I do construction management for one of the biggest real estate firms in Oklahoma. Dally is a graphic designer for Kicker Audio. Jonathon manages a restaurant. Brad is a fine dining waiter. Garrett bounces around for employment.

Name three albums that changed your life and tell us why you chose each album.

Black Flag - Everything Went Black. Because it showed me how punk could be aggressive and catchy. This album really made want to play guitar.

Replacements - Tim. Because it showed me that music can be loud without being abrasive.

The Avett Brothers- Mignonette. This album inspired my interest in bluegrass/country/americana

What are you doing in Austin, TX right now?

Well, this is our last show of tour, and we are on the homeward bound stretch, and we came through here. We havenât had a whole lot of success in Austin the last couple of times we came through here. It can be a tricky city to play, but we felt good about it. Our buddy Eric Green lives here, and we know some other people who live here, and we were like, "weâve got to come through. Itâs close to home, and if anything, weâll get to see some friends that we know here." And it was a great show. I loved it.

Are you touring in support of a release?

We just released an EP that was recorded by Stephan Egerton of All fame, so weâre trying to hawk that EP. Weâll be recording a full-length in a couple of months, after we go to the Fest.

How has tour gone for you?

Weâve toured the Midwest several times, and weâve had a great time. Itâs kind of like our home base, so when we started leaving the Midwest it got to be give or take, which is normal because a lot of people donât know about us. But we had really great shows. We also had shows where not many people showed up, but when they did show up responded well, and they bought stuff. More importantly they bought us beer.

I loved Colorado. Itâs such a great scene. We had a lot of fun playing with Dear Landlord and Off With Their Heads. The venue was awesome. You roll up, and it looks like this shack-y, tin metal warehouse thatâs literally right next to a scrap yard with cranes picking up junk and crushing it, and itâs right next to the garment district. And you walk in, and itâs like a light shines upon you. Itâs a completely different thing than you thought. It was outdoors, and they had burgers, and there were a lot of people, and it was fucking badass. And Dear Landlord was fucking amazing - good show.

We also had a lot of fun in Prescott, Arizona. Itâs a mountain town between Phoenix and Flagstaff with sixty thousand people, and Hour of the Wolf is from there, and it was just an amazing show - lots of people, all super excited, and they all knew what was coming. They dug it.

What does a typical day/night of touring look like for Red City Radio?

Driving down a highway listening to either metal, hip hop, or country. Getting to the venue. Eating. Drinking. Playing. More Drinking. Heading to our home for the night. Drinking some more. Sleeping. Starting all over again. We're pretty simple folk.

Have you ever played Fest before?

Weâve never played Fest. We applied last year, but we sent a demo and maybe they didnât like it, but they emailed us this year and asked us to play.

Why should somebody choose to see Red City Radio over one of the many other bands that will be sharing a time slot with you guys at Fest?

Personally, I love discovering new music. Itâs almost a game with me. Can I find something amazing before anyone else? I mean, Iâm not saying weâre amazing, but perhaps to someone we are? Why not? I mean there are only so many spots right?