by Ben Conoley Interviews 13 years ago

Hailing from Falmouth, Cornwall, a beach town in Southern England, Bangers are a three-piece pop rock/punk band. Winning fans with frequent gigs all over the UK and a couple of split releases bursting with raucous, gruff yet melodic anthems, you need this band in your life. They like beer and Propagandhi and are all-round great guys. Already causing a buzz on the UK punk scene, they've recently played some shows in mainland Europe and preparing to head to Gainesville, FL to get drunk and play songs at The Fest.

In an interview with Ian Chaddock, bassist/vocalist Andrew Vivian Horne tells Punknews about their history, split releases, their excitement to be heading over for The Fest and bad encounters with gypsy girls.

The three of you used to be the beach-themed party hardcore band Hit The Beach. How did Bangers come about and what bands influenced the style of raw pop punk?

We've all been in bands together for years, the 3 of us actually started practicing together for another band before Bangers but Roo moved to Brighton so that kind of fizzled out. 6 months later he split up with his girlfriend, quit his job, came back to Cornwall and started sleeping on my sofa. He'd written a few songs and we were all pretty bored of not playing music so we just went with it.

Hit the Beach had run it's course by that point. Was loads of fun, but we only ever played for like 2 months of the year and there's only so many songs you can write about the beach! So it's cool to do something a little more serious that we can actually do all year. Influence wise I guess when we started we just wanted to do something in a similar style to Fifth Hour Hero, The Alkaline Trio, Jawbreaker, The Lawrence Arms but I'm not really sure whether we actually sound anything like that.

What's with the band name? Is it from sausages, explosives or old cars?

Um, known of the above! You know how in like dance music scenes people call awesome tracks bangers? Basically it comes from that. In terms of the band we just wanted to cut out the crap, write good pop songs and make sure they're all bangers! I tend not to go out of my way to explain that. I like that it's pretty ambiguous, if people want to think we named our band after a meat product, explosive, type of racing or whatever then I find that pretty funny! 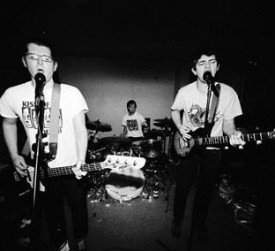 You released the limited split with your friends Ssssnakes. What was the story behind that split? Was that weekend pretty crazy?

That just came about after we decided to book a weekend of shows together and someone had the idea to do a super limited split just for the 3 shows we did in Falmouth, Portsmouth and Exeter. We just recorded a couple of songs in our practice space to go along 4 that Ssssnakes had already recorded and Jamie designed and screened the artwork which turned out looking pretty awesome. I don't think the weekend was actually that crazy in the end, I was pretty ill I think. We've definitely had messier weekends with those guys since!

The split LP with Break The Habit was a long time coming but it's amazing. Are you happy with the results? The artwork looks incredible too. Which is your favourite track and why?

Yeah, it took about 9 months from when we recorded for it to come out which was pretty frustrating, but definitely happy with the results and the whole thing looks great. People seem to be into it too which is cool.

Don't really have a favourite track, I'm still really proud of all of it. I like how "Huddle In" turned out, that was a song that Roo wrote for his school music coursework when he was 16 and I always thought it was a great song but it was just way too pop for the bands that we were playing in at the time. It's cool to bring it back after like 8 years!

"The Hard Way" is a live favourite. What does that song mean to you?

"The Hard Way" is a song that Roo wrote about when him and Kelly Kemp used to go to parties in Brighton, were the most drunk and obnoxious people there and generally made more enemies than friends. I don't think very much has changed.

What's the most fun Bangers gig you've played to date?

It's pretty hard to single out one particular show, we just got back from a short trip to mainland Europe and all those shows ruled! Also punk n bowl last December, the 3 shows we did with Bridge and Tunnel, the Kingston show with Lemuria in June, the whole tour with Crazy Arm, all awesome.

One of the funniest we've ever played was I think our second show, we played at this weird festival / party type thing in the middle of nowhere in Cornwall. We played in front of about 15 people in this massive inflatable tent, half way through our set the generator broke and the whole thing slowly deflated on top of us, in the end we just held it up with our heads and carried on playing. Later that night Hamish slept with a 17 year old gypsy girl who gave him an STI.

Are you excited to be playing The Fest this year alongside other great UK bands like The Arteries and Above Them?

Yeah we're all super excited about it, I've been the past 2 years and it's amazing! We'd only just started this band when I was there last year but watching everyone playing and having a great time made me pretty jealous so very psyched to be playing this year!

It's even more amazing that loads of the best UK bands are playing this year too, The Arteries and Above Them as well as Calvinball, Brothers, OK Pilot and Chillerton are awesome bands and some of our favourite people to get drunk with so that should make the weekend entertaining!

What's the best night you've had at the Fest in Gainesville and why do you think it's so special?

Every night at the Fest rules, it's just like a massive punk rock reunion! It's so awesome to see lot of people that we've played with in the UK or met through the punk scene that we would probably never get a chance to hang out with if it wasn't for Fest! It's so strange to see the whole town centre taken over by a few thousand people with very similar music tastes to ourselves, I'm not sure if there's anywhere else in the world where that happens?

Most of my Fest memories just involve me being wasted but a massive highlight for me was seeing Small Brown Bike at Fest 6, pretty much my favourite band since I was about 17 and I never thought I'd ever get a chance to see them.

You've got plenty more tour dates planned in the UK too which is awesome to see. Any more splits or other releases planned?

Yeah as far as new releases go we've got a few new 7"s in the works, we've got a single coming out as part of the Art of the Underground singles series and also we're doing a 4-way split with The Arteries, Brothers and OK Pilot both of which should be out in time for Fest. After that we should have another split coming out at the start of next year as part of the series All in Vinyl are doing, not sure who ours is going to be with yet but they've got some great bands involved so far.