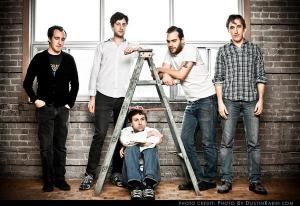 by Adam White Arts and Crafts Tours 13 years ago

The Constantines have expanded their 10 year anniversary plans from two December gigs to a week of shows across Ontario. A few of the special guests for these shows have been confirmed so far, with Attack In Black joining the group on the 11th in Toronto and Oneida and Metz joining them the day after. The expanded tour now includes stops ranging from the Ottawa and Kingston down through London, including their former home of Guelph.

The band was formed in Guelph, Ontario in 1999 by Steve Lambke, Bryan Webb, Doug MacGregor, and Dallas Wehrle and now features keyboardist Will Kidman. Over the past decade they've released four full lengths and a handful of EPs and singles on a variety of labels including (the now-defunct) Three Gut Records, Suicide Squeeze, Sub Pop and Arts & Crafts. Their latest was 2008's Kensington Heights.

Tours: Off With Their Heads tapped to support Municipal Waste