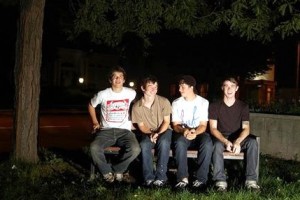 Contributed by writethatbitch, Posted by Bryne Yancey Run For Cover Interviews 13 years ago

Kingston, PA's Title Fight has been rapidly gaining popularity among a variety of punk fans over the last six years. Their brand of pop-punk earns them spots on line-ups across the board – from Trapped Under Ice to Tigers Jaw. Their latest EP, The Last Thing You Forget, was released in June on Run for Cover Records, and their first full-length is finally in the works after a handful of seven inches. After just wrapping up a full U.S. tour, they're already back on the road with New Found Glory for a few East Coast and Midwest gigs. Stephanie Thornton talked with this up-and-coming band about the latest EP and future material, influences, and the effect this band has on its underage members.

First of all, I saw you guys a couple weeks ago at St. Stephenâs in D.C. with Trapped Under Ice and Lion of Judah. You put on a great show and nearly everyone was going off. Considering you generally play a pop-punk style, are you surprised that hardcore kids react to you like they are at a Madball show?

Ned Russin: We started off playing generally all hardcore shows so we are pretty much used to it. In Wilkes-Barre we weren't really categorized into a "pop punk" band or a "hardcore" band, we were just a band of 13 year-olds really. It's not really surprising to us now, but at things like Sound and Fury, United Blood, and This is Hardcore to see that many kids going off is just kind of crazy; but at the same time, we are still all hardcore kids so it just makes us feel at home.

You guys are always on the road and youâve played shows with a wide variety of bands from pop-punk to hardcore, what kind of reactions do you get from audiences across the board? Do you have a preference for shows you most enjoy playing?

Shane Moran: I feel that our reactions tend to be pretty much the same whether we are playing to a "hardcore" audience or not. Kids either go off or they donât. Although, itâs hard for us to tell if kids are into it if theyâre just standing around staring at us because we ourselves are so used to going nuts for bands that we like when we see them live. Thatâs our nature I guess. Iâm sure there are kids that are still into us but just donât react the same way. I actually think Iâd prefer that over kids beating the shit out each other when we play.

Your touring schedule is booked through the end of this year. Where are your favorite spots to play and why? Where would you love to tour that you havenât yet?

Shane: Long Island, D.C. / Baltimore, and Richmond are always really good to us and we get a chance to see some of our best friends. Iâd like to tour California more extensively and hopefully hit up Europe in the near future.

Ben Russin: Florida and Kentucky are cool too.

Considering the variety of bands you play with, what kind of variety has there been amongst Title Fightâs influences?

Shane: A lot. If a band is influenced by only one genre of music or a certain kind of sound it is really easy to get lost in that and end up sounding watered down and boring. We try to make our music unique and exciting for us to write and listen to. We draw a lot of inspiration from bands that went out of their way to sound unique.

You guys are about to embark on a tour with New Found Glory for three weeks at the end of this month. Has New Found Glory had much impact on Title Fight? What kind of expectations do you have for the upcoming tour?

Shane: Iâm not so sure if they have had a huge impact on our music but definitely on each of us individually. Iâve loved this band since I first heard them in seventh grade and theyâre still relevant to me to this day. Coming Home was such a great record. I still listen to all of their albums regularly. I have a New Found Glory flag hanging up in my room at home. Itâs serious. I am glad Iâll be able to watch them every night for 3 weeks straight. Other than that I donât know what to expect.

Ned: I saw New Found Glory for the first time when I was 11 I think when they toured with Blink on the Take Off Your Pants and Jacket tour. They played a local venue in Wilkes-Barre a little before that and they sent out the whole show to it. From then I was pretty much a fan. Catalyst was a huge record for me and Coming Home is awesome. As far as my expectations go, I am really just trying to keep them grounded. I know we are going to be playing for a lot of people and a lot of which have never heard of us, but I am just going to try and have as much fun as possible.

Title Fight is a fairly young band, your material only dates back three years. Yet you play tight with a good dynamic amongst the band members and you have an established fan base. To what can you most attribute the success of this band so far?

Shane: I think the "success" can be attributed to the way we tend to go about things. We have always had these things that we wanted to do as a band and we would work towards whatever little goal we had set until we got it. We have just tried to keep things moving and whatever came our way we would try to capitalize on. We have been doing what most bands normally do and some people seem to care about us and thatâs really cool.

Ned: We are a band that is made up of friends. We have been a band for six years now and we are going to be a band for much longer because we decided to start the band because we were friends. We all work well together and we all have a great time.

On that note, just how old is everyone in Title Fight? Has this band interfered with or changed any critical âgrowing upâ steps such as graduating high school and going to college?

Shane: Iâm the oldest at 20. Title Fight has been around since all the other guys were in middle school. This band has always been the most important thing to me so a lot of "growing up" stuff like jobs and school has always taken the back seat. Most recently the band has made its biggest interference with us having to drop college but I couldnât be happier.

Ned: I'm 19. I am a freshman in college now. After we got the New Found Glory tour offer we kind of realized we had to make a choice between college or Title Fight. I know that college is important and I am going to go back, but we decided we had to take a chance. I am going to finish school later.

Ben: Iâm also 19 (considering Iâm Nedâs twin), and Jamie also just turned 19. Throughout high school, we always played on the weekends and toured over breaks. We made sure it never affected our school work too much, but now we have to take the opportunity to tour as much as possible.

In the same vein, as a successful young band, when you look back to the start of the band, what goals have you already accomplished as a band and what goals remain?

Ned: For me, we pretty much accomplished the only goals I ever had: we put out a 7" and we did a tour.

Ben: We recently completed our first full U.S. tour this past summer which was a big goal of ours. A common goal of most bands is to get as big as they possibly can. And we'd love to do that too, but I'm more concerned with having fun while traveling around the world, and playing to as many new faces as we can.

You just released a new 7" on Run For Cover Records, The Last Thing You Forget, in June. Musically, it seems youâve shifted gears a bit on this last release, adding a bit more aggression and depth. What was the motivation behind the change in sound on the new release? How do you feel about the way the record turned out?

Ned: I don't think there was a motivation to change the record rather than just we wrote songs. I feel like the three new songs on The Last Thing You Forget are our best songs we have written. I think the record is great, but we are definitely striving to top that with the release of our next record.

Ben: Yeah, I donât really know what the motivation was. I guess the progression just kind of happened naturally. And Iâm very happy with how the record turned out. Jay Maas of the Getaway Group did a great job engineering, mixing, and mastering it.

How has the response been so far for the new material?

Shane: So far so good.

Ben: Iâve heard a lot of positive responses so far, which is awesome. We only released three new songs, though, and people have made it pretty obvious that they are waiting for more.