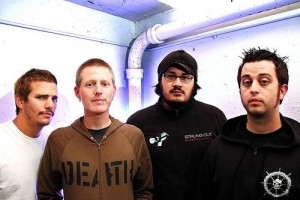 Contributed by william_david, Posted by Ben Conoley Interviews 13 years ago

Hit the Switch almost made it. The Chino, California punks signed to Nitro in 2006 to rerelease "Domestic Tranquility and Social Justice," only to have the label go the free download route, and shortly thereafter get out of the business of releasing new albums altogether. But the guys are trying not to let it get to them; they've simply continued playing shows and got in the studio, several times, to record the latest effort, Observing Infinities, which released in May.

Guitarist and vocalist Matt Hawks exchanged emails in September with Punknews staff interviewer and Pads & Panels purveyor Bill Jones. Hawks opened up about the Nitro experience, how the band has gotten back on track, the confusion surrounding the release of their latest album and what's to come.

Last time we talked, Hit the Switch was on the verge of re-releasing the self-produced Domestic Tranquility and Social Justice on Nitro Records, though the album was getting a digital-only and initially free release. Shortly thereafter, it became apparent that Nitro was falling apart, for lack of a better term, as it relates to releasing new music. Can you just explain the timeline, situation there and what affiliation, if any, the band still has with the label? It looks like they posted some news on the new album, Observing Infinities.

When we self released DT&SJ, we made up a shit load of press packs and sent them everywhere, and we were that rare band that actually got noticed that way. Soon after we met with Sean at Nitro, we found out that Brian (Dexter) wasnât much involved in the label and no one there had the power to take initiative, so everything moved super slow. Though Nitro was very accessible to us, eating lunch and shootinâ the shit wasnât the reason we sign to that label. So from the beginning we were barking a lot at Nitro to keep the ball rolling, and working to keep ourselves on the road at the same time. We were just figuring it all out as we went along. So once it was made clear the label was going catalog, we soaked up all we could about how the machine works, and kept on truckinâ. We are still on good terms with just one person at Nitro. Mayra Chavez basically runs the label now; she is pretty awesome.

For that being the bandâs first experience with a label, was it at all discouraging? Did you try to shop around the new album, or decide from the start you didnât want to go down that road again? What did you learn from the first album that you took into the second?

We defiantly regret the decision to sign with that label, but we learned a lot by making that decision - a lot about how the industry works. Since the beginning, we have been reluctant to want to sign with anyone. We realize we are at a stage where we do not have much leverage when negotiating a deal, and the relationships we were making on the road with bands, promoters and indie magazines were helping us grow on our own. However, there is still so much we donât know, and have seen bands we love take an indie label route and keep their integrity. So itâs a tough decision, but we are learning that the DIY way for punk rock feels more natural to us. With the new record, we utilized every resource we had and felt a lot better prepared for the release.

Speaking of Observing Infinities, there seems to have been a bit of confusion leading up to the album. You actually emailed me back in February, talking about a double record release - with a 10-song digital-interval release (two songs a week for five weeks), then a 10-song physical copy with a DVD. Then there was talk of an online-EP titled How the West Was Won, which was then later reported to possibly be a full-length. Then the double-record release was discussed again. Then a 10-song track list for Observing Infinities was posted, and the final album has 12 songs. What the hell has happened over the last three years since Domestic Tranquility, how did you arrive at the final release, what is still to come, and how much of the confusion has to do with the MySpace statement that 75 percent of the band is now potheads?

Ohhhh shit! Yeah, we self medicate in excess. We had originally planned to call it How the West Was Won, then we found out fuckinâ Led Zeppelin released a DVD with that title. Then we did some soul searching and the lyrical content changed a bit, so the title was renamed Observing Infinities with the intent of doing a double release. Then so much time had passed and the record took way longer than we thought to make, so we just wanted to get this goddamn music out. We went ahead and added a few unreleased songs and dropped that shit.

All right, so onto the new record, Observing Infinities - where does its name come from, and whatâs going on in that cover art? There seems to be a carnival, sort of explosion-looking sun, water tower, and is that a beach up front? Who did the art, and how does it play into the themes of this album?

The name is something I made up to summarize the cycles of the human condition in correlation to the infinite universe. The artwork is an outlook at possible past and futures of other civilizations, in other solar systems, in other galaxies. That is the theme of the record.

Lyrically, Observing Infinities seems to be in line with the content of Domestic Tranquility - a shit ton of social commentary and politics. How different or similar of a place do you see the world and yourselves in since the last album more than three years ago, and since the election?

My view of the world has definitely changed since the last release, I still have the same convictions, but I better understand the origins of my beliefs, and I feel I can better express that too.

Musically, the album seems to have a different tone this time around. It isnât a drastic, pretentious departure or anything, but while Domestic Tranquility had a sort of snotty-as-fuck, in-your-face Anti-Flag vibe, with a hell of a lot of skatepunk, Observing Infinities sounds a bit more calculated, with a harder edge to it and a few more guitar solos. Do you see the sound as a natural progression of what youâve been writing, or was there a conscious effort to really switch things up this time around?

Most definitely feels like a natural progression of where we want to go. We always want to push forward and be radical in our music. We love to thrash, and we also love progressive punk, and we also love hardcore punk. Itâs hard to blend all that together in a cohesive way, but we are getting there!

What influences are you pulling from on this album, and what are some of your favorites bands and albums of the last few years?

Been taking in a lot of Jazz, like Miles Davis and Duke Ellington. Also, as always, we are cranking Mars Volta, Propagandhi and Saves the Day. Propagandhi's Supporting Caste fucking owns every other punk ass poser band out there! Hands down, dopest dope Iâve ever smoked.

"The leader in generic punk brands" takes a harsh stance against a particular breed of band. Was this aimed at anyone in particular, and if not, what did inspire the venom for this one?

This song was aimed at a few bands who I used to really look up to. It is sad to see the bands that inspired you to make music lose their passion and intellect. They become too cynical, succumbing to the same vague shitty rebellion party songs that the one-hit wonders are putting out.

Back when Nitro released Domestic Tranquility, you had already been working on new material for awhile. How much of Observing Infinities dates back that far?

We started writing OI a little less than a year after DT&SJ came out, weren't really sure at that time if we were going to do an EP first and actually went into the studio at three different times, and came up with three different mixes. Thatâs why you will notice a change in the mix throughout the record.

Anything else fans should know?

We are going to Europe in December! And another record is on the way!

Tours: We Are The In Crowd join Hopeless Records