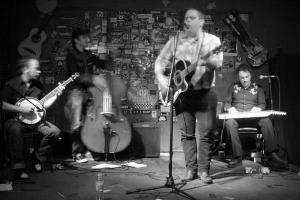 Austin Lucas and Mike Hale are about to grab their acoustic guitars and hit the road together. The Suburban Home Records labelmates will playing a handful of shows in Canada before softly barreling down the East Coast toward Florida. Both men will be supporting 2009 full-lengths; Lucas issued Somebody Loves You early in the year while Hale's Lives Like Mine followed a few months later.

*Anyone interested in attending any of the house shows listed should e-mail Austin with the city in the subject line. He'll reply with the address.