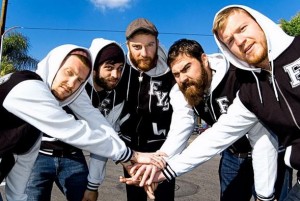 After a brief stint on Decaydance, Four Year Strong have signed to Universal Motown and will release their major label debut, Enemy of the World, on March 9, 2010. The release will follow up the band's recent covers album, Explains It All.

A clip from a new song entitled "It Must Really Suck To Be Four Year Strong Right Now" can be heard here. The band will be supporting the release in early 2010 with a tour alongside Strike Anywhere, The Bled and others.