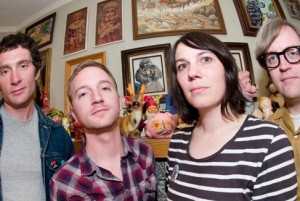 Contributed by tonynoidea, Posted by Adam White Tours 13 years ago

Chicago's CoCoComa are headed to Europe, ringing in the new year with a show in Berlin followed by dates in Germany, Italy, Spain, France, Belgium, and the Netherlands. On select dates they'll be playing alongside Sonic Chicken 4, Mondo Ray, and Chimiks.

Germany's Red Lounge Records is releasing an LP in time for the tour that collects songs from the band's 7" singles along with live recordings, and unreleased tracks. It's titled Spectrum of Sounds. CoCoComa released their second LP Things Are Not All Right earlier this year on Memphis's Goner Records.

Mission Of Burma (US East Coast)