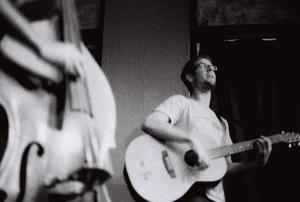 Contributed by flood, Posted by Bryne Yancey 10 years ago

Andrew Jackson Jihad have announced a slew of new releases for 2010. First is a live LP recorded on a 4-track at a hotel after party during The Fest 7 in Gainesville, FL. Said LP saw a limited release with a special pressing at The Fest 8, and will receive a wider release in January through Asbestos Records.

Second, the band will release a split 7" with Chicago's The Gunshy via Silver Sprocket; this record should be available by February.

Last but not least, Andrew Jackson Jihad will do a split with O Pioneers!!! that will see a vinyl (and perhaps CD) release via No Idea Records, and a limited cassette release through Underground Communique.

The band recently released a new full-length entitled Can't Maintain through Asian Man Records, and will soon hit the road for a tour of the west coast with Kepi Ghoulie and Partners in 818.

Tours: Over Stars and Gutters