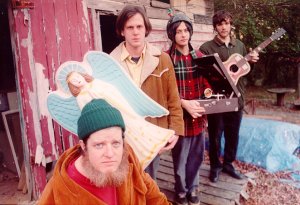 Contributed by nikko, Posted by Bryne Yancey Merge 13 years ago

Jeff Mangum has returned with his first recorded output in some time. The reclusive former Neutral Milk Hotel frontman recorded a cover of "Sign the Dotted Line," originally by The Tall Dwarfs, for Stroke: Songs for Chris Knox. The tribute album is dedicated to New Zealand musician Chris Knox (Knox was a member of The Tall Dwarfs), who suffered a life-altering stroke in June of 2009.

Other artists appearing on the album include Bonnie 'Prince' Billy, The Mountain Goats, Yo La Tengo, Jay Reatard, Lou Barlow and others. It's currently available digitally from Merge Records here, and a physical release is slated for February 23, 2010.