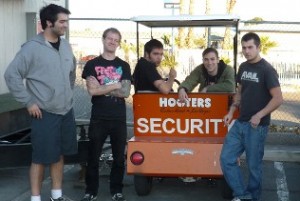 Contributed by tonynoidea, Posted by Bryne Yancey No Idea 13 years ago

Off with Their Heads have detailed two new releases in the pipeline. First will be a split 6" record with hardcore supergroup and labelmates No Friends; OWTH will be covering "Field of Darkness", originally by Pegboy, while No Friends will be offering their take on the Dag Nasty classic ''Another Wrong" on their side.

The second release will be a split 7" with Detournement; each band will contribute one original acoustic track and one cover song. For this release, OWTH will cover "Princess", originally by Panthro UK United 13, while Detournement will put their spin on Tracy Chapman's "Talkin' Bout a Revolution." Both records will be released by No Idea Records.

The band has also announced even more tour dates alongside The Slow Death (formerly Pretty Boy Thorson and the Falling Angels), The Queers, Dear Landlord and Cobra Skulls.

Piebald reissuing back catalog through Rise