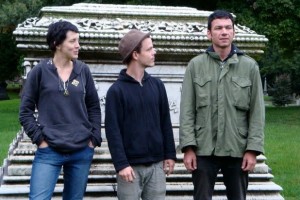 Brooklyn, NY's forgetters recently hit the road for a short tour of the east coast, giving many in the south their first taste of the new project from Blake Schwarzenbach, Caroline Paquita, and Kevin Mahon. The 11-date tour, appropriately titled "Too Small to Fail," accompanies the news that forgetters have already begun recording and we can expect material in February. The band sat down with Stephanie Thornton after their second date of the tour at St. Stephen's in Washington, D.C. They discussed the upcoming recording, expectations for the tour, and the proper spelling of the band name.

This is only your second date of the tour, but how have the first couple dates been and what are some of your expectations from this tour?

Blake Schwarzenbach: The first two shows have been totally different.

Paquita: It was an old opera house and itâs now a DIY space for events . . .

So a little more quiet here then?

Paquita: Well it was a church.

Well, hopefully you can maintain some of the ruckus as you go along.

Paquita: Well I think people were feeling it. Itâs just that it was a church so thereâs sort of that quietness, you know? Youâre not supposed to be loud, and be like, "Yeaaaaah!" So I think maybe people were hesitant to do that.

Yeah, maybe so. I assume this tourâs title (in addition to its play on the Wall Street term) "Too Small to Fail," was decided because of its short, 11-date length. Are there any plans for a longer tour sometime coming up?

Paquita: Itâs actually the name of a song we have, "Too Small to Fail."

Will you be getting a good chance to sight-see? I donât know if you get much chance to do that as you go along.

Schwarzenbach: Weâre going to try. I mean, we play every night.

Yeah. Do you have any cities that youâre particularly excited about seeing?

Schwarzenbach: Thatâs what started this idea. The idea of going to New Orleans and back, and everything else was kind of arranged around that.

So it was going to be a road trip to New Orleans and you just decided to turn it into a tour.

Paquita: Well we wanted to do a southern kind of Eastern Seaboard trip, but New Orleans seemed like a good point to kind of focus on as being the southern-most.

Is it any warmer here than it is up in New York?

Schwarzenbach: It was 21 degrees last night.

Paquita: With the wind chill they said it was four [degrees]?

Schwarzenbach: It was an especially cold night in Brooklyn last night - itâs not always like that.

I read a review of an early live show that mentions lyrics are seemingly more politically driven than those weâve heard from Blake in past projects. Is that true and what other factors are inspiring your lyrical content for forgetters?

Schwarzenbach: I feel like my writing process is exactly the same, but I feel like capable of taking on more subjects that are further outside of myself now. As long as I can treat them in the same manner. I donât feel like Iâm dictating or scolding. If it comes in the same way, then I go with it, so that informs a lot of these songs.

Ok, so speaking of lyrics, what do you admire most in lyrics as a listener?

Schwarzenbach: I like economy. As a songwriter, what I listen for, what always strikes me about a great lyric is when one can do something in about four words. I think thatâs obviously really true in great country music - to cite the most obvious example - but I think it goes into every form of lyric music.

Do you feel that forgettersâ sound compares to any of the previous bands at all and what are some of your main influences for this new project?

Mahon: I donât think it sounds like anything Iâve done before, which is nice. Itâs been a real challenge and a pleasure for me. Iâm learning a lot. I donât know about you two.

Mahon: (To Swarzenbach) what about you?

Schwarzenbach: Yeah I think weâre finding our sound by inventing it . . .in the magic zone (laughs). When the element of surprise appears, thatâs when we know weâve found it.

Schwarzenbach: When I can say "I didnât know I could play that way." As the guitarist in this band thatâs been my experience. I feel most transformed as a guitar player.

What qualities do you all feel you are taking from your experiences with your former bands and how are you applying them to forgetters? Do you have any kind of hopes or worries for this new band?

Schwarzenbach: I think we all know enough about what we like and what we donât like, and we kind of pick a path through that. In a strange way the world of music has been so upset (laughs) in the last five or six years through a kind of file-sharing, technological revolution. That itâs a strange open field now. Ambitions and aspirations are kind of futile. So itâs liberating, but itâs also a little daunting to be a recording, performing artist, to figure out how you can actually make a living by music. I find that both freeing and challenging. Weâre putting together a 7" now. Trying to figure out how to do that was totally new because you can do it in so many ways . . .

Paquita: Yeah, I feel that one thing we all learned probably from other musical projects and just our own different creative projects is just about how to work with each other and how to have a sense of collectivity.

So you said we can expect something in February then?

Paquita: Somewhere around then.

Can you give any more information about that, then? Itâs a 7" you said?

Paquita: It might be too long to sound good pressed in 7" format, actually, physically.

Mahon: Weâre kind of just taking it as it comes. We just got over the recording process, soâ¦

Paquita: Yeah, and now weâre in tour-process trying to talk about the recording process. Thereâs only so much you can do.

You are in the showcase this February for Don Giovonni Records. Is that a confirmed record label for you all?

Schwarzenbach: No, weâre just helping, joining in. Weâre not on the label.

Is Shellshag from Brooklyn as well?

Yeah I was going to ask about bands coming out of Brooklyn. Any local bands youâd recommend?

Paquita: Weâre real into Weird Weather, our sibling band - we both had our first show together.

So, overall what sort of goals do you all hold for forgetters? Long term, short term, anything.

Mahon: Last for a long time.

Schwarzenbach: I would personally like to see all of the songs that we like recorded. The best thing I can offer people is to be kind of counter-intuitive periodically. I learned that from watching bands do things that I thought were insane . . . or I just didnât really understand why. I feel like we are a band that really perplexes people sometimes, and thatâs good.

Schwarzenbach: I mean how we do things or how we donât do things. I think people expectâ¦certain people expect you to just go for it right off the bat. (Laughs) They canât understand why youâd want to play a basement or something.

Paquita: I think people have a lot of expectations in general . . . yeah, I think on our first performance people were seemingly upset about how cheap our shirts were and that was definitely strange because they were used shirts that we screened - just making things accessible. Thatâs something that weâre all really into is accessibility, and thereâs people who donât understand why a show is cheaper or all-ages. There are some thingsâ¦there our preferences to have things accessible, and some people are like, "Why? Iâd pay 20 dollars to come!" Well maybe not everybody can spare 20 dollars to come.

I was going to ask about people expectations. Considering show flyers will often advertise you all in regard to your former bands, do you feel youâre getting a lot of fans just wanting to hear covers and how would you respond to that?

Schwarzenbach: I think theyâre at least savvy enough to know thatâs not going to happen. I mean actually, honestly I feel like the response has been really warm and open. People are recognizing that this is its own band. At that point they can decide, "Is this something Iâm going to stay with or is it just, like, weird theyâre doing this other thing?" (laughs) But I havenât heard any, like, "Wow, this really, really is not Jawbreaker."

Schwarzenbach: And it really isnât. At least no one has said anything like that . . .

Schwarzenbach: Yeah, maybe they say it when they get home.

Paquita: I think, in general, people are surprised that Iâve ever played music before, and "How are you playing with these guys?" Etcetera. Iâve played music for a long time, so . . .

Paquita: yeah, well. Thatâs been something to try and figure out how to express that. Because for me, thereâll be times where thereâs three of us in the band and thereâs constantly the two other band mates being highlighted, and Iâm like, "OK, sure. I donât expect everybody to have heard of my previous band," butâ¦Itâs hard to not look at it as also a larger issue within the punk scene which I think has been kind of a continual dialogue . . . these things have come up again. The band I was in for a long time was two-thirds women - this is Bitchinâ . . . itâs like going from one extreme to another. For me, itâs been interesting to kind of get into that dialogue again. When it really is, like, essentially we just like to play music.

RX Bandits / The Builders And The Butchers / Zechs Marquise