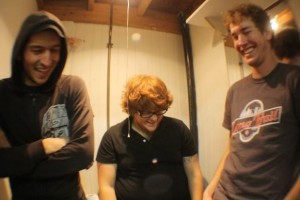 Contributed by k-dubs, Posted by Bryne Yancey 12 years ago

Providence, RI's imadethismistake has announced a tour to follow the recording of their sophomore full length, as well as an apperance at Rad Fest. The dates will see the band hitting the midwest and east coast over a three week span.

The new album is titled Bow & Quiver, is slated for a May release through Bermuda Mohawk Productions. Once out, it'll follow up 2008's It's Okay.