Braid remastered reissues due out soon 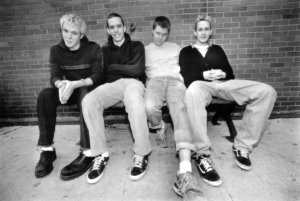 by Aubin Paul Polyvinyl 12 years ago

Polyvinyl Records will be issuing remastered versions of classic albums by emo/post-hardcore pioneers Braid. Along with remastering some of the earlier material, the label is issuing vinyl versions of the records for the first time in many years. Both The Age of Octeen and Frankie Welfare Boy Age 5 were remastered by John Golden (Nirvana, Melvins, Sonic Youth) and will be available on LP and CD for the first time in a decade. The label is also planning 2xLP reissues of Movie Music Vol.1 and Movie Music Vol.2 and rounding out the reissues will be a new 7-inch pressing of the band's beloved I'm Afraid of Everything which was also out of print for the past ten years.

Band members Todd Bell and Bob Nanna were deeply involved with these reissues -- having spent a good part of 2009 writing new liner notes and searching for rare photos. The whole series is due out April 13, 2010.