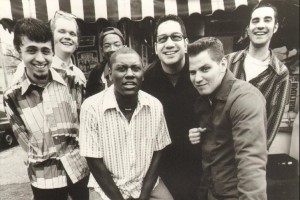 by Aubin Paul Streams 13 years ago

To coincide with the band's recently announced reunion after nearly eight years of inaction, we've got a rare song from Spring Heeled Jack's out-of-print album Songs from Suburbia. . The band featured future members of The Mighty Mighty Bosstones, Reel Big Fish, Less Than Jake, Pilfers and other notable acts of the late 90s third wave ska movement. This year the group will also be reissuing their long out of print albums Static World View and Songs From Suburbia on vinyl via Asbestos Records.

You can check out the song on their Punknews.org Profile