Far to release 'At Night We Live' 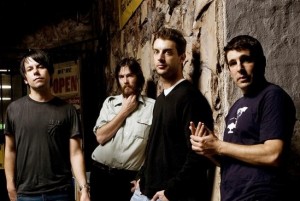 Far will be releasing their first new full length in more than a decade. The record is titled At Night We Live and is due out May 18, 2010. It is the follow-up to Water & Solutions which was released in 1998.

I've got ten years of interviews saying this would never happen, that Far would never play together, let alone make a record, so I really have no idea what will happen from here on out. All I know is that I'm really proud of the record, and I think it stands with anything we've made. Really, that's all I cared about as we were making it. This record has some of our heaviest moments, our prettiest moments, our most epic moments, our weirdest moments -- and even with all those twists and turns, I actually think it's the most cohesive record we've ever made.

This month the band will be performing at the Noisepop Festival in San Francisco and San Diego's Indie Fest.

Music: Down By Law: "Crystal"