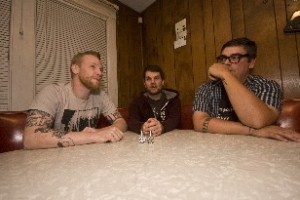 Contributed by Dante3000, Posted by Ben Conoley Paper and Plastick 12 years ago

We always wanted to put it out as an LP as well, but since we were never a full-time band and lacked the funding, the timing never seemed right….Over the past year things have changed, and the band has become a priority for the members. Paper & Plastick released our new album "In What Way." We also have been touring a lot more, and are even going to be heading to the United Kingdom for two weeks in the spring to play. Now we want to put "Sinker" out on vinyl more than ever, but we need your help.

To help fund the project the band has launched a Kickstarter page where fans can donate to help reach the $2,000 goal. Donations can be made in any amount and as a, "thank you" the band is offering up rewards from the normal (such as a digital copy of the album or a copy of the vinyl LP), to the extravagant ( such as having singer Tony Flaminio will write a song for you or having the entire band playing in your living room).

More information can be found on the Kickstarter page, which will be running until the end of Sunday, February 21 and is located here.