Welcome to our latest edition of Band on Band. We are proud to feature Fake Problems and Ninja Gun, who recently shared a Split [7 inch] on Sabot Records. The boys took turns asking each other 5 questions, discussing everything from snakes and muscles to pillows and male pattern baldness.

Johnathan Coody: So I was power chilling with my kitty, Jaspurrr, on the couch the other day just "Keeping up with the Kardashians" and when it went to commercial we happened past the History Channel. The History Channel was featuring programming on the recent upsurge in the Burmese Python population in South Florida. Kitty and I were alarmed by their predatory prowess and we immediately thought of you fellas and hoped you were aware of the measures you should take to stay safe. My question is, what do you do if you find one of them shits in your yard?

Chris Farren: Kill it. We at Fake Problems League of America are no strangers to defending mankind's superiority over beast (See: the Turkey Incident). I know for a fact Casey Lee wouldn't think twice before putting one of those suckers in his famous leg-lock, kiss it on the mouth and put a bullet through its head.

How do ya'll stay ripped? P-90X? Jeffrey [Haineault ] has a Bowflex from the mid-nineties at the trailer. That's how we stay blow'd up.

Farren: Derek and I are involved in a pretty intense splits competition. You know, "the splits," where you split your legs side to side. Right now we're tied because neither of us has the balls to go all the way.

Also, not so much of a question here Sean, but I still have your Harry Potter pillow. I'll never give it back. For this reason I feel it's best that we move past this complicated situation and resume our friendship with all it's previous fervor. And the next time I come to Naples you better not sick that attack dog girl on me again. That pillow has been with me on a lot of long hauls and I need it. 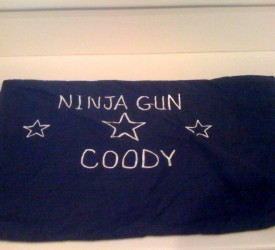 Sean Stevenson: Hey Coods, I know you still have my pillow and that you will never give it back. I know this because I too once shared that passion for Potter. The customized Ninja Gun pillowcase your moms made was a great replacement though. I still use it for tour. P.S. that, "attack dog girl" is my beautiful girlfriend and she will destroy you.

So Derek, when we first met, you were a red bikini briefs kind of guy. I know this because that's what I awoke to find you in on my kitchen floor all those years ago. How has touring affected your choice of undergarments as you've aged?

Derek Perry: I've taken different approaches to undergarments over the years. As you recall, I had a stint with red undies. However, this wasn't the important aspect. These underwear were special because they were pre-worn by John Berna. I went to boxer briefs, then to freeball, but have settled on wearing Sean's dirty underwear. Something about underwear being previously stretched and worn -- I can liken it to people who purchase used American shoes…

Who are your favorite South Georgia gutter pop standouts?

Farren: From First To Last, of course! Such raw talent. Raw is war.

Casey Lee: If you could have breakfast with Sir Elton John and your only choices for food were one pancake with no syrup or unlimited eggs but the eggs are always undercooked. Also, Elton John gets unlimited waffles and says you can have 5 bites of waffle if you order the undercooked eggs but there's a 50% chance you'll get food poisoning if you get the eggs. And if you get the pancake your breakfast with Elton John is like 15 minutes but if you get the eggs you hang out for like 2 hours and he does one verse from "Benny and the Jets" and you get a parking ticket if you order the eggs, because you're at breakfast so long. Also if you get the pancake you find $100 on the sidewalk when you leave.

Jonathan Coody: Believe it or not we actually worked with Reg a few times. That's what his friends call him, Reg. We ghost wrote a lot of that "Sleeping with the Past" album back in the 90's when he was on the outs with Bernie. He's actually a really big asshole. We went to some croquet tournament with him and he had kind of a bad day on the croquet pitch. He flipped the fuck out and started throwing biscuits (cookies) from the buffet table at the guy who won. We had to throw him in the van and whisk him away before we were all pinched by the bobbies.

Chris Farren: Coody, when you quit playing keyboards/screams for From First To Last to focus on Ninja Gun did you anticipate such a backlash from the mall metal community? I've heard rumors you can't even step foot inside of a Hot Topic anymore without getting booed.

Coody: Well, you know, I committed the cardinal sin of hairdcore. It clearly states in the bylaws of the hair club for kids that if you get fat you're out. One night at a show a kid called me on it. Then they all turned on me. They looked at each other and said things like, "Yeah, you know, he does look a little rotund these days doesn't he." One thing led to another and before I knew what happened, a pair of girl jeans were thrown onstage and I was obligated by the aforementioned bylaws to prove my allegiance and compliance by trying them on in front of the gathered masses of judgmental little suburban hair farmers. What can I say? They just didn't fit anymore. So I cut my hair and taught myself to write real songs.

Farren: Jeffery â you've had many different hair-styles throughout Ninja Gun's career - I recently discovered you were voted "Most Likely To Keep Having Great Hair" in high school. The question is, how do you alternate between poofy, and extra-poofy so seamlessly?

Jeffrey Haineault: Well, first off you have to be blessed with poverty and a gorgeous head of hair. Then wash with Equate dandruff control 2 in 1 shampoo plus conditioner. I usually let nature do the drying, by riding dirt roads in the camo golf cart or 4runner with the windows down and letting mother nature do her thing. The finished product is a perfect head of fro. I call it the Poverty Poof. It says, "Hey, I might be poor, but I like to party too!" I just recently cut it all off, my tax return came in, so I splurged.

Thad Megow: Depends on what you jerk to, baldy.

Coody: In a tickle tournament? Probably Virgil. In a heated game of Candyland? Jordan. In a 1989 style episode of American Gladiators' Eliminator challenge? Neither, they'd both get owned by Zap.

The Flatliners: "Carry the Banner"